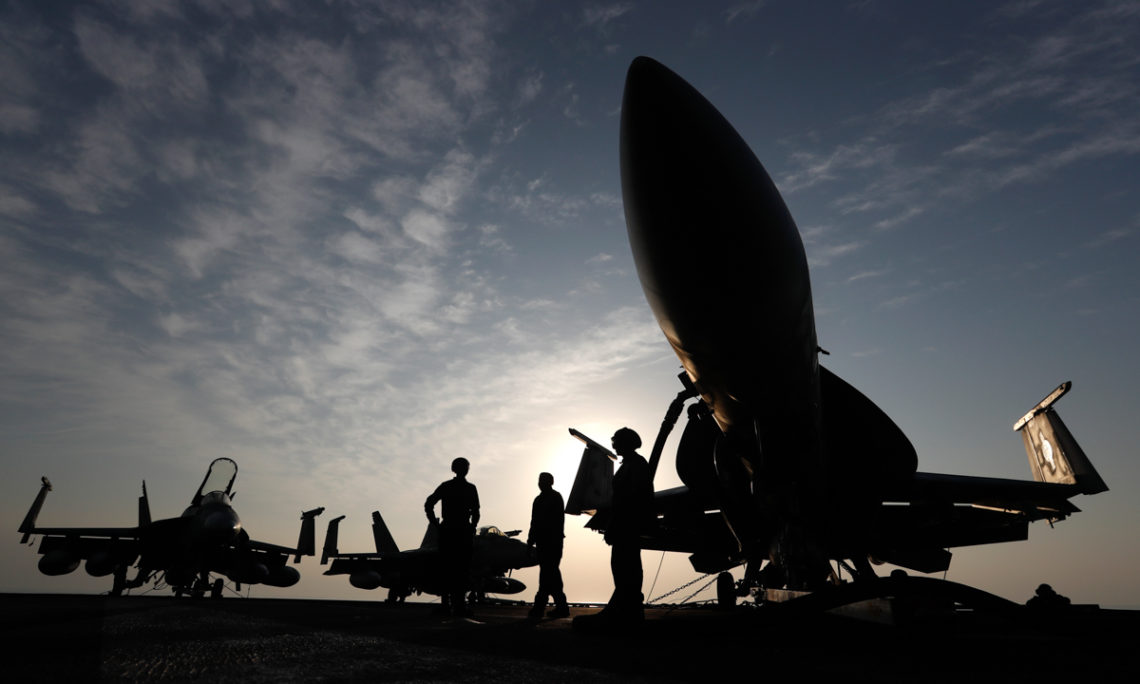 Fighter jets on the deck of the U.S.S. Dwight D. Eisenhower, part of Operation Inherent Resolve, the campaign to drive Islamic State militants from Iraq and Syria (© AP Images)

The U.S. leads the 73-member Global Coalition to Defeat ISIS, which supports operations conducted by, with and through partner forces in Iraq and Syria. The campaign against ISIS has dramatically accelerated over the past six months.

In recent briefings, Secretary of State Rex Tillerson and Special Presidential Envoy for the Global Coalition to Defeat ISIS Brett McGurk credited the progress in the fight to the accelerated campaign under President Trump and to the president’s delegating battlefield decisions to commanders on the ground.

ISIS declared itself a caliphate in 2014, seizing control of large areas in Iraq and Syria and attracting foreign fighters. Iraqi forces aided by U.S. military trainers began driving the militants back in 2015. On July 10, the Iraqi Security Forces liberated the city of Mosul in Iraq.

As McGurk wrote in a letter to the coalition, military successes come in parallel with humanitarian response. Over 2 million Iraqi civilians are back in their homes in areas liberated from ISIS, an unprecedented rate of return for a post-conflict environment.

The United States has provided more than $1.4 billion in humanitarian assistance for the Iraq crisis since 2014, and more than $265 million in stabilization assistance over the past two years.

For Raqqa, in Syria, U.S. experts have finalized the U.S. plan to deliver humanitarian aid on the day the city is liberated to the 50,000 people trapped inside. The pre-positioned supplies include food, tents, shelters and medical supplies and facilities for the entire populace.

In addition, the United States has stocked enough food in northeast Syria to feed 447,000 and enough medicine to treat more than 200,000, with more medical supplies on the way, McGurk said. Already there is enough water, as well as hygiene and sanitation supplies, to meet the needs of 180,000 people for two months.

“All these things are getting pre-positioned to be ready for the day after ISIS,” the special envoy said.

“Our next steps on the global war to defeat ISIS are to recognize ISIS is a global issue. We already see elements of ISIS in the Philippines … gaining a foothold,” Tillerson said.

In Manila, the Philippines, for the Association of Southeast Asian Nations (ASEAN) Summit August 2–8, the secretary of state said he was outlining for the ministers “steps we’d like to see the region take,” including sharing information to track terrorists, enhancing border security, shutting down terror financing networks and eliminating safe havens.

While the fight is far from over, the U.S. and its allies are determined to annihilate ISIS.