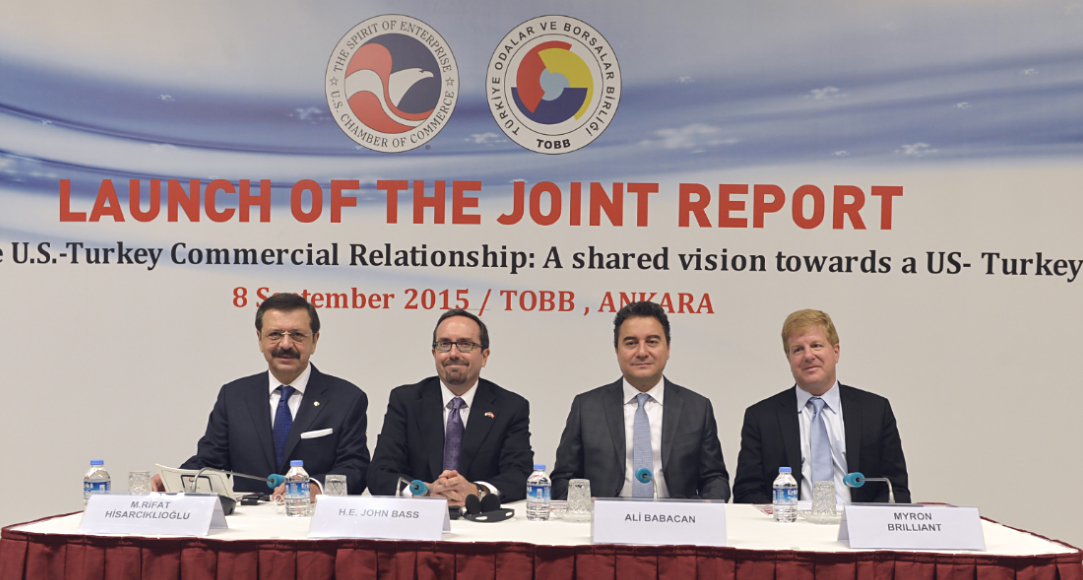 Ambassador Bass at US Chamber of Commerce and TOBB event to launch their joint report:“Upgrading the U.S.-Turkey Commercial Relationship: A shared vision towards a US-Turkey FTA”

US Chamber of Commerce and TOBB event to launch their joint report: “Upgrading the U.S.-Turkey Commercial Relationship: A shared vision towards a US-Turkey FTA”
September 8, 2015

Thank you all for the opportunity to speak to such a distinguished group of Turkish and American business leaders and policy-shapers.  I especially want to thank TOBB and Rifat Bey, for partnering with Myron and the U.S. Chamber of Commerce to commission this joint report on Upgrading the U.S.-Turkey Commercial Relationship and hosting us here today.  Thank you for taking the lead in promoting the U.S.-Turkey trade and investment relationship.  I also appreciate your constructive partnership with the American-Turkish Council (ATC) for the upcoming Washington Conference.  This report provides TOBB and the U.S. Chamber a very useful instrument to influence policy discussions about the Transatlantic Trade and Investment Partnership (T-TIP) in Turkey.  I look forward to working with you both—and everyone here today—to creatively continue that dialogue and to move that relationship forward.

And I am honored to be here with former DPM Babacan who will continue to play an important role in the Turkish economy whether he is in or out of government.The United States and Turkey are great partners in many areas.  We have been friends and allies for over 60 years.  But most people think about our relationship in terms of military and security relations.  Our economic and commercial relationship has historically and comparatively been smaller.  When we look at the size and diversity of both our economies, we believe this part of our relationship is underperforming.

President Obama, Secretary Kerry,—and I—place great importance on expanding and deepening Turkish and American economic and commercial cooperation.  As Secretary Kerry said, “Foreign policy today is economic policy. And leaders in government need to understand that. There is a synergy and an importance to this relationship that cannot be denied.”  This joint report shows that fact.

If you take one thing away from my remarks today, I hope that it is a renewed appreciation for how important private sector input is in guiding U.S. policy development, especially when it comes to trade and investment.  As the American and Turkish business leaders here today know, U.S. trade policy primarily develops organically based on its meritsfrom established, productive business relationships—not by political will alone.  That must also be there, but it comes into play much later in the process.

On the political side President Obama has shown his interest in increasing trade and investment.  After his visit to Turkey in 2009, President Obama and then-Prime Minister Erdogan established the Framework for Strategic Economic and Commercial Cooperation (FSECC) with the goal to elevate commercial and economic cooperation to “strategic” levels.  In 2013, they set up a new High Level Committee (HLC) to address the very topics raised in this report: Turkey’s urgent concerns about the disproportionate effect that a T-TIP agreement may have on the Turkish economy based on its obligations to the European Union Customs Union.

Updating and expanding the EU Customs Union agreement is a vital and positive step that will bring Turkey closer to free market principles which will make you a more attractive trading partner and destination for Foreign Direct Investment (FDI) and any number of future Free Trade Agreements (FTA).  And these FTAs don’t happen quickly—or on their own—so it’s important to make progress now.  That’s the second theme of my speech: the urgency of making free market structural reforms.  It’s hard poltically, but it will be time well invested, for the Turkish economy and your future trading relationships.

I want to talk briefly about T-TIP, to put it in perspective.  Even after the 10th round of negotiations, there is still a long way to go in what promises to be a thorough and comprehensive process.  I think it’s important to remember amid all of the press that this is the most complicated trade agreement ever attempted.  If it is successful, it will increase standards, lower barriers and tariffs, and create the world’s most competitive free market.  It will increase the $1.5 trillion in annual trade flowing across the Atlantic—almost 100 times U.S.-Turkey trade.  In one week, the United States and EU trade as much as the United States and Turkey do in a year.  Through T-TIP we are trying to demonstrate that trade can flourish alongside strong labor and environmental protections and that creating opportunity requires no sacrifice of regulatory standards.  But even though we already trade extensively and invest heavily in each other’s economies, it is still an uphill battle to make that trade and investment easier and more productive.

Although there is a long way to go to reduce further trade barriers, Turkey’s dynamic market also appeals to U.S. business. That’s why Secretary of Commerce Pritzker last November brought the President’s Export Council (PEC), comprised of more than a dozen CEO’s representing private companies with an aggregate market capital of over $850 billion to Turkey.  The President’s Export Council serves as his principal national advisory committee on international trade.  The PEC chose Turkey for its inaugural trip out of all the countries in the world.  Why? First and foremost, the CEOs in PEC viewed Turkey as a high priority, economically important, growth market.  The trip also reinforced public and private sector support for existing forums such as FSECC, HLC, and the U.S.-Turkey Business Council.

In summarizing her visit Secretary Pritzker said, “We joined together to deliver a message to Turkish leaders about the need to reform; to create a level playing field for businesses; to open their doors to more American exports—and, in the process, to a more robust commercial relationship with the United States. That message was far more powerful and far more effective coming not only from me or any government official, but from you, our business leaders, as well.”  Again, I reiterate the tremendous value that private sector input has in driving essential business-to-business change ahead of any trade policy development.

And that brings us here to today, to the launch of this well-balanced report initiated by the private sector, with six concrete steps constituting a plan of action that will lead us to closer economic ties and trade development.  This report has a great approach that incorporates both Turkish and American perspectives.  It notes things that we can do and things that Turkey can do to better align its laws for any future agreements.

I want to highlight the report’s fourth step in its plan of action that captures cross-sectoral concerns that limit trade and investment in Turkey.  It is called “Building Confidence by Addressing Issues.” It notes that the U.S. issues multiple reports detailing our most pressing concerns with Turkey’s trade policies that Turkey can use a guide to demonstrate good faith in eliminating barriers.  It also notes the powerful role Congress plays.

Recently Congress introduced Free Trade Agreement (FTA) legislation requiring that future trading partners “1) protect intellectual property at levels similar to U.S. law, 2) eliminate localization rules that condition trade and/or provide regulatory advantage to products produced in local facilities or assets in the country, 3) refrain from rules that impede digital trade or restrict cross-border data flows, and 4) avoid using exchange rate practices to gain an unfair competitive advantage.”   Unfortunately, in each of these areas (IPR enforcement, localization requirements, e-commerce restrictions, and unfair exchange rates) current Turkish regulations and practices work against U.S. companies in the Turkish market.  Over the past year, in spite of active advocacy by Secretary Pritzker and our embassy team on these issues, the trend line on trade policy in Turkey has not improved and many would say has turned negative.  Instead of leveling the “free trade” playing field, U.S. companies reported that Turkish authorities have unpredictably raised tariffs, imposed redundant testing requirements, or rejected shipments without notice—often faster than businesses could reasonably react.

As you all know, the U.S.-Turkey business community is vibrant.  Energized by an active and engaged private-sector, Congress will first ask for businesses’ views about the challenges that American companies face abroad before even beginning to explore the possibility of an FTA.  Congress follows the same process when considering other FTAs, such as with South Korea.  So again, mobilizing the Turkish-American business community to make a compelling case for an FTA with solid data and analysis is vital.

The report notes that it may be useful to evaluate how comprehensiveAmerican FTAs are with other countries compared with Turkey’s.  It may be helpful for Turkey to see the scope of the U.S.-South Korea FTA compared to the more limited Turkey-South Korea FTA by analyzing them side-by-side.  I also think that perhaps it would be just as valuable to compare where South Korea’s market access, services agreements, and trade barriers were when they began to negotiate their FTA with the United States relative to where Turkey’s are now.

There is good analysis in this report; I think that it is a good start.  But I feel that it may be premature for me to comment on the report’s thoughtful and creative options for how Turkey might eventually join T-TIP or pursue an independent FTA with the United States.  Since T-TIP negotiations are ongoing, it’s premature for a U.S. official to speculate how any third party might eventually be included.  But we both have expressed an intent to open up the agreement to other parties once it is signed.  Clearly there is an opportunity there.

As I mentioned earlier, my colleagues in Washington and I understand that Turkey feels that it is being left out of T-TIP negotiations and that its unique circumstance as an EU CU member is being overlooked.  But as a good partner and friend, the United States has been informing Turkey about every step of on-going negotiations with the EU.  Even as we begin to discuss with your government ways that Turkey can prepare to align with T-TIP, we encourage your government to use this time to take the steps it needs to prepare for the more competitive world that T-TIP will bring.  We strongly encourage Turkey to work to further strengthen the rule of law.  Implement critical market reforms that promote transparency, the ease of doing business, and predictability that businesses need to make good business decisions.

Before I conclude, I want to reiterate that U.S. trade policy is based heavily on its economic merits and input from the private sector.  Entry into such agreements is not a collateral benefit from a strategic relationship, which is what some in Turkey seem to expect.  While T-TIP and EU Customs Union negotiations are on-going, use this time to invest in yourself—and in our mutual commercial relationship—to develop a compelling economic argument based on a U.S. business constituency supportive of Turkey’s inclusion into an eventual T-TIP agreement, or whatever it ends up being.

We live in challenging times—and you live in a difficult region.  That’s why our partnership—on all levels, but especially our economic and business partnership—remains so important.  I want to wish all of you well as we continue to develop our strategic economic and commercial partnership together.  I hope to see a number of you at the American Turkish Council’s (ATC) 34th Annual Conference on U.S.-Turkey Relations in Washington D.C. in late September.