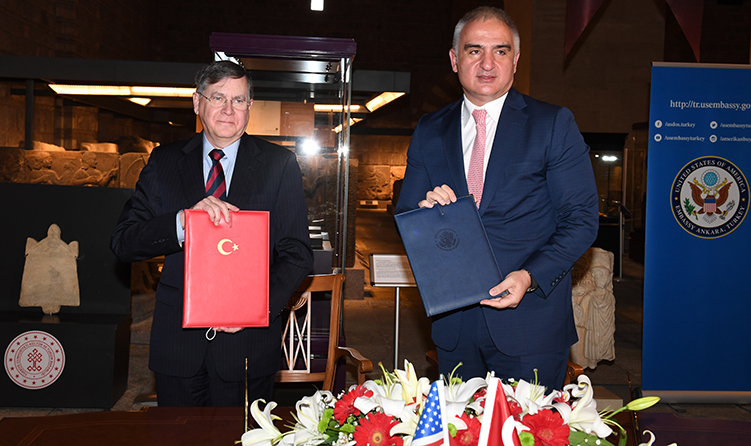 Today’s agreement is a testament to our shared commitment to protect Turkey’s rich cultural heritage. Turkey has served as a nexus of multiple civilizations, each of which has left its mark on the country and our world history. There is, however, a long history of threats to archaeological and historical sites in Turkey. The destruction or disappearance of any of this history and culture is devastating. This agreement takes additional steps to protect sites in jeopardy from pillage and trafficking of their priceless antiquities.

Cultural property trafficking is a problem the world over, not just in Turkey. The looting of archaeological and historical sites and the sale of antiquities and other cultural objects on the international market has bolstered the revenues of transnational organized criminal and terrorist groups. Heritage sites that are hundreds and thousands of years old, a record of civilization over time, are rapidly being destroyed for financial gain.

In the spirit of our close partnership, the United States and Turkey are committed to denying transnational criminal groups access to this funding stream. The United States has been unwavering in its commitment to protect and preserve cultural heritage around the world, and to prevent trafficking in cultural property that fund criminal networks.

Our policy is clear: The unlawful destruction of cultural heritage and the trafficking of cultural property are unacceptable. The goals of the cultural property agreements are, one: to reduce the incentive to pillage; two: to help countries protect their cultural heritage; and three: increase lawful access to cultural objects and awareness of world heritage by encouraging interchange of materials for scientific, cultural, and educational purposes.

Today’s agreement demonstrates the joint commitment of the United States and Turkey to ensuring that Turkey’s heritage will be protected and accessible for future generations to enjoy and appreciate. Cultural heritage is a source of pride for all Turkish citizens. With this agreement, the United States will do its part to safeguard Turkey’s cultural resources, for the benefit of all.

There are many to thank for bringing this agreement to fruition. Our greatest thanks go to Minister Ersoy and his team in the General Directorate for Cultural Assets and Museums, officials of the Ministry of Foreign Affairs and all Turkish experts who have worked so closely with us to make this agreement a reality.

I wish I could be with you for the signing of this agreement that solidifies U.S. and Turkish collaboration to combat looting and trafficking of cultural objects. Unfortunately, global circumstances preclude my travel.

Nevertheless, I wanted to take this opportunity to congratulate Turkey and the United States in taking this important step today. I appreciate Minister of Culture and Tourism Ersoy and the dedicated Turkish officials and experts who have worked so closely with Ambassador Satterfield and the team at the U.S. Embassy in Ankara as well as the cultural heritage specialists in Washington, D.C. at the Bureau of Educational and Cultural Affairs. In addition, I am grateful to the Bureau of European Affairs and the President’s Cultural Property Advisory Committee.

The agreement we sign today will enable the U.S. government to restrict the importation of undocumented archaeological and ethnological objects from Turkey. This will protect Turkey’s cultural heritage, keep these valuable artifacts out of the hands of traffickers, and will benefit the people of both our nations.

The United States has been unwavering in its commitment to combat cultural property trafficking and preserve cultural heritage. We are proud to have signed similar cultural property agreements with several countries around the world. And we are happy today to have Turkey join us in this global fight. Thank you for your commitment to preserving Turkey’s rich cultural heritage, and your partnership on this issue, which will benefit both our countries.

It gives me great privilege and great honor to join Minister Ersoy in being able to sign this agreement on behalf of the United States.