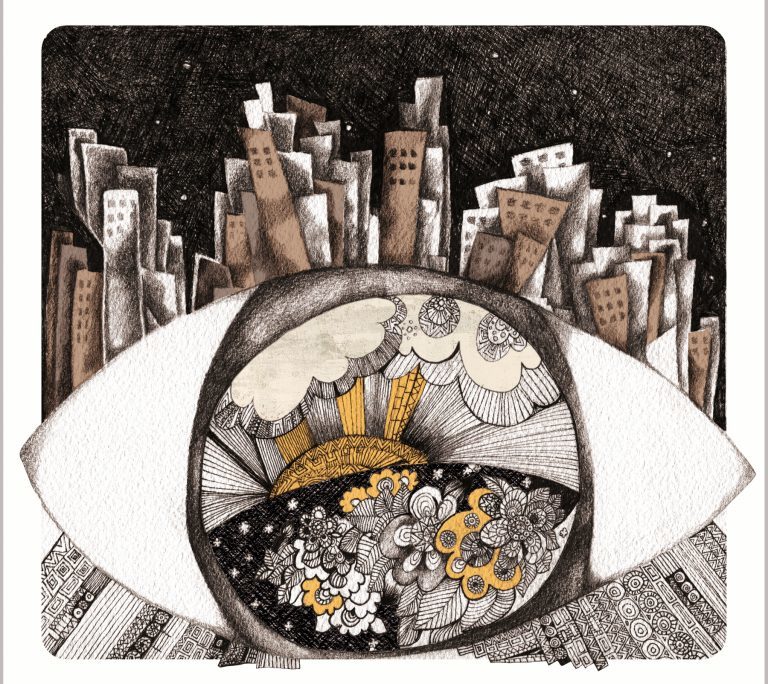 Dream of City through the Eye of Women (© Gulnar Hajo)
If civil war forced you to flee your homeland, how would you live? That question is at the heart of an exhibition at the U.S. ambassador’s residence in Ankara, Turkey, showcasing the work of eight Syrian artists now based in Istanbul.

Titled Living, the exhibition — part of a larger project called Art From Exile — opened December 2 and will remain on display through the end of January.

According to U.S. diplomat Holly Holzer, the project came about after she heard a Syrian musician perform on a borrowed instrument at an Istanbul café. Moved by the experience, Holzer sought other displaced artists, working with colleagues at the embassy to reach out to Syrian artists exhibiting at Turkish galleries.

The 15 works exhibited in Living are all by professional artists, most of whom studied at the University of Damascus.

Eyas Jaafar says his portraits depict men and women separately, to signify that “war is breaking some families apart.”

Gulnar Hajo is an illustrator and author of children’s books, and she says that people whose cities have been decimated by war still yearn for beauty and art — and women, especially, dream of seeing their cities whole again.

Imad Habbab, known for his bold use of color, explores how place and identity are intertwined (see painting, right). Cities shape their residents, he says, and each corner of a city has a different rhythm.

The painting below, by Falak Al Ghazi, is an example of a technique called fumage, which uses the soot and smoke of a candle’s flame to create portraits or landscapes.

“My artwork shows a Syrian man’s face,” Al Ghazi said. “I want it to convey a message … about the suffering of my family in Syria.”

Four other artists are included in the exhibition. Samer Al Kadri’s stylized paintings evoke the human form, and Houssam Alloum depicts the masks worn to hide the ugliness of war. Hiba Aizouq paints portraits that probe her subjects’ interior lives, and Adnan Jetto’s films document the human toll of the conflict in Syria.