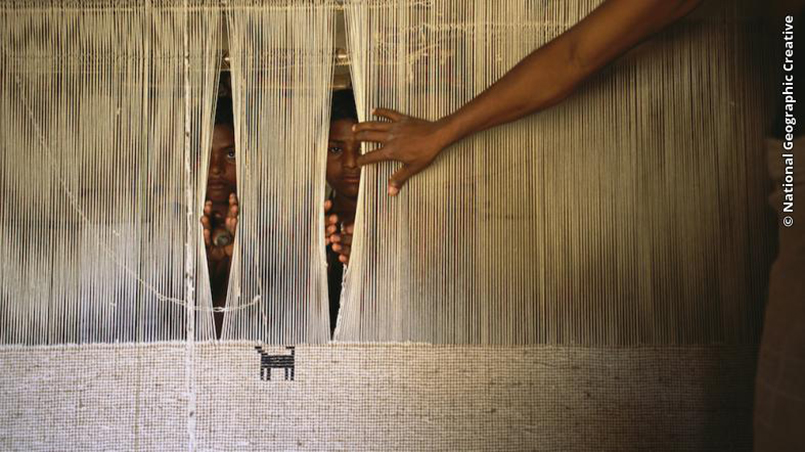 Children forced to work in a textile factory peer from behind a loom in Uttar Pradesh, India.

As we near the end of National Slavery and Human Trafficking Prevention Month, we must remember that the struggle of millions of trafficking victims around the world continues.

President Trump’s first Presidential Proclamation of 2018 is a reminder that the horrors of human trafficking, also known as modern slavery, persist today and that an estimated 25 million people are currently subjected to modern slavery worldwide.  No country is immune.  It is happening in every corner of the globe – in homes, factories, hotels, brothels, and on farms and fishing vessels; in countless places where one might not expect it.  Human trafficking happens right here in the United States as well.

Across the globe, it is a crime that is evolving as perpetrators develop more sophisticated techniques to exploit people, a trend that also makes human trafficking difficult to detect.  One of the major challenges to combating human trafficking is lack of awareness and understanding of what it is – a hidden crime that often goes unreported, in part because victims may be threatened by their traffickers not to contact police, do not trust law enforcement authorities, or are fearful of reprisal, stigma, or punishment.  This is why it is a problem that requires the efforts of governments, private companies, nongovernmental organizations, and individuals all over the world to address.

As Secretary of State Rex W. Tillerson said, “everyone has a role to play. Governments, NGOs, the private sector, survivors, and, most of all, the American people all must continue to work together to make human trafficking end in the 21st century.”

But some people may think:  What does a proclamation on human trafficking mean to me?  What can I actually do?  The TIP Office was recently asked this question via Twitter.

One of the main goals of the Proclamation is to raise awareness about who is affected by human trafficking and where and how these crimes are committed.  Raising awareness is key to effectively tackling human trafficking.  Awareness sparks conversation, but it also engages communities and their partners to find solutions.

Throughout the month, I’ve been reading news stories from around the United States about how city and state governments, NGOs, and individuals have been inspired to do their part to raise awareness and prevent this crime.  Some of the stories include accounts of:

Everyone can play a part in fighting human trafficking from teachers and doctors, to first responders and parents.  Survivors of human trafficking play a key role in teaching us how to truly prevent this crime from happening in the first place and how to find and care for the victims more effectively, as well as identify and punish the perpetrators.

Though you may be overwhelmed by the magnitude of the problem, you as an individual have more power than you might think.  To help, we’ve come up with 15 Ways You Can Help Fight Human Trafficking.  It’s not an exhaustive list, but it’s something to get you started.

Here are some examples of news stories of average people who listened, observed, and recognized the signs of someone in distress and took action:

Tackling human trafficking requires more than one event, or one month, and won’t succeed overnight.  It will take a long-term, global effort, but it starts at home.  It starts with you.

The President’s proclamation is a call to action to empower through education: to engage everyone to better understand the issue and learn the signs and tools to fight human trafficking.  We can all do our part to help end this crime once and for all.

Editor’s Note: This entry also appears in the U.S. Department of State’s publication on Medium.com.