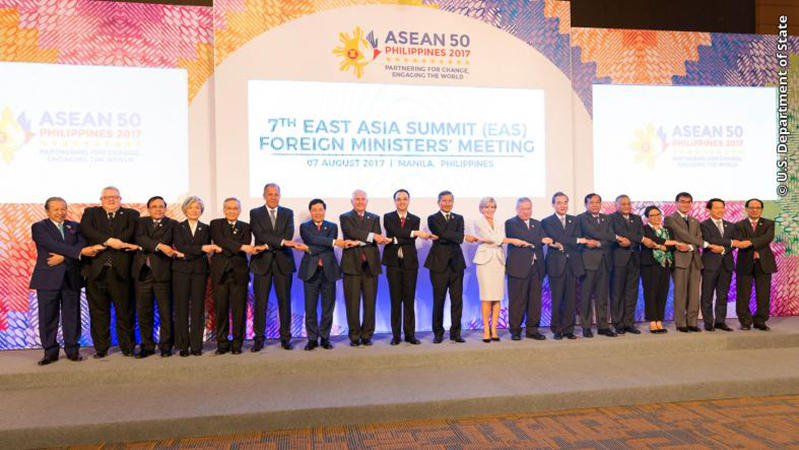 U.S. Secretary Rex W. Tillerson traveled to Manila, Philippines on August 5 to participate in the Association of Southeast Asian Nations (ASEAN) Regional Forum, the East Asia Summit Ministerial, the U.S.- ASEAN Ministerial, and the Lower Mekong Initiative Ministerial. Since 1967, ASEAN has made remarkable strides in maintaining peace across Southeast Asia, accelerating economic growth, and improving the lives of the citizens of its 10 member states. The United States is also proud to celebrate 40 years of close ties between the United States and ASEAN this year.

On August 6, Secretary Tillerson delivered remarks at the 10th Lower Mekong Ministerial Meeting in Manila. The Lower Mekong Initiative strengthens cooperation among member countries in the areas of environment, health, education, and infrastructure development and builds on common interests. While in the region, Secretary Tillerson also took the opportunity to honors fallen heroes at the American Battle Monuments Commission’s Manila American Cemetery and Memorial in Taguig City, Philippines.

During a series of meetings with ASEAN counterparts on August 6-7, Secretary Tillerson discussed a range of issues, including the denuclearization of the Korean Peninsula, maritime security, and counterterrorism. The U.S.- ASEAN Ministerial meeting also recognized ASEAN’s 50th anniversary, as the Philippines’ chairmanship of the association coincides with this historic milestone.

In Manila, Secretary Tillerson held a press availability where he discussed the situation with the Democratic People’s Republic of Korea (DPRK also known as North Korea), U.S.- ASEAN relations, China, and Russia.

“I think the strong UN Security Council resolution unanimously approved, working in coordination with China and Russia both to put out a statement from the Security Council that I think is quite clear in terms of there being no daylight among the international community as to the expectation that North Korea will take steps to achieve all of our objectives, which is a denuclearized Korean Peninsula….

We hope, again, that this ultimately will result in North Korea coming to the conclusion to choose a different pathway, and when the conditions are right that we can sit and have a dialogue around the future of North Korea so that they feel secure and prosper economically.”

Secretary Tillerson noted his constructive conversations with ASEAN colleagues in the U.S.-ASEAN meeting that signaled a “continuing of the strong commitment from both an economic and security standpoint but also continuing the cultural and people-to-people exchanges that exist today through a number of educational programs and other efforts that we think are important for drawing our peoples closer together.”

In a press statement recognizing August 8 as ASEAN Day, Secretary Tillerson reiterated the importance of our ASEAN relationship. He said, “We congratulate ASEAN on its 50th anniversary and look forward to continuing our partnership and friendship with the people and governments of Southeast Asia and the ASEAN Secretariat to advance peace, stability, and prosperity for all.”

Later this week Secretary Tillerson will continue his trip with a stop in Thailand to pay respects to His Majesty the late King Bhumibol Adulyadej and engage Thai officials on the enduring U.S.-Thailand partnership and regional issues. In Kuala Lumpur, he will meet officials to discuss strengthening cooperation on a range of issues in the 60th year of U.S.-Malaysia bilateral relations.

Editor’s Note: This entry is also published on Medium.com/StateDept.