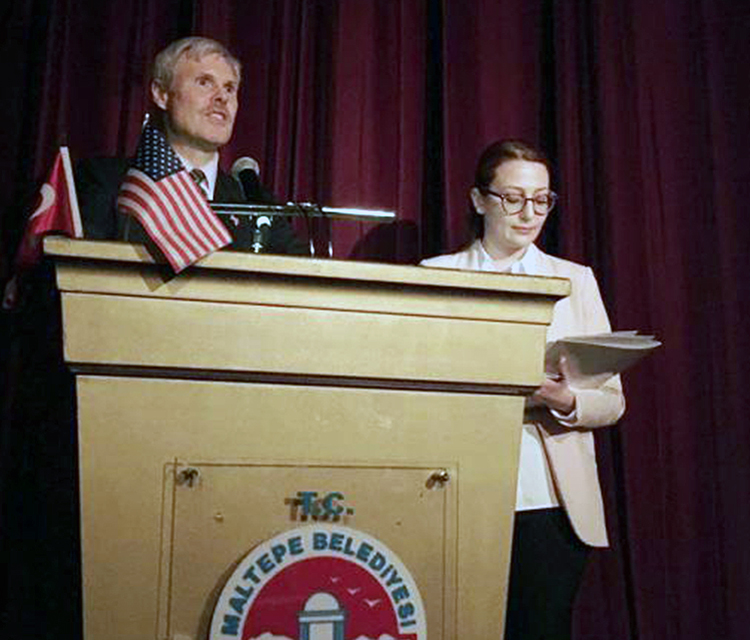 It is a great honor to be here today and to have the opportunity to introduce Mark Wynn, a man who dedicated his life to both law enforcement and to protecting society against the scourge of domestic violence.

As you have heard, he has more than 20 years of experience in law enforcement as a police officer, but has also become one of America’s leading experts on domestic violence. He has appeared many times on television and reached many thousands of people in his educational efforts. Among the dozens of awards he has received for his tireless work is the 2012 Family Justice Center Alliance Lifetime Achievement Award. As a recognized expert in his field, Mark has testified before Congress, delivered speech at the White House, and appeared on many television shows in the United States in addition to training thousands of justice and law enforcement officials.  This subject is a life-long passion for him and I am delighted  to welcome him and his wife.

I know that this subject also resonates in this society, from conversations with friends and from reading the headlines. For instance, it is clear how deeply the death of Özgecan Arslan touched a nerve in the heart of Turkish people. But unfortunately Özgecan’s tragic death did not end the problem here in Turkey. Only since January of this year, more than 80 women in Turkey have lost their lives as victims to violence by an intimate partner.

This is a problem in my country as well. In United States, every nine seconds a woman is beaten or assaulted – every nine seconds. This is in fact a worldwide problem. We all must work together to share our experiences, to look at our successes, and to come up with new ideas so that together we can end domestic violence.

There is much more to say about how domestic violence hurts all of us, our families, our communities, our economies, our nations. The damaging it causes extends far into the future as well in the psychological and social impact it has on the victims, and through the greater risk that the children who were brought in homes with domestic violence face of becoming victims and abusers themselves. There is also much more to say about how it takes a whole society to put an end to this curse of violence. All citizens need to be involved in making sure that everyone understands from the youngest age that violence against others is not acceptable, that a real man treats all women the way he wants to be treated; with respect and with dignity. And that women never deserved to be hit.

There is no one more qualified than Mark Wynn to talk about how we can create communities that say no to violence. And I am delighted now to invite him to the stage to share his thoughts with you.