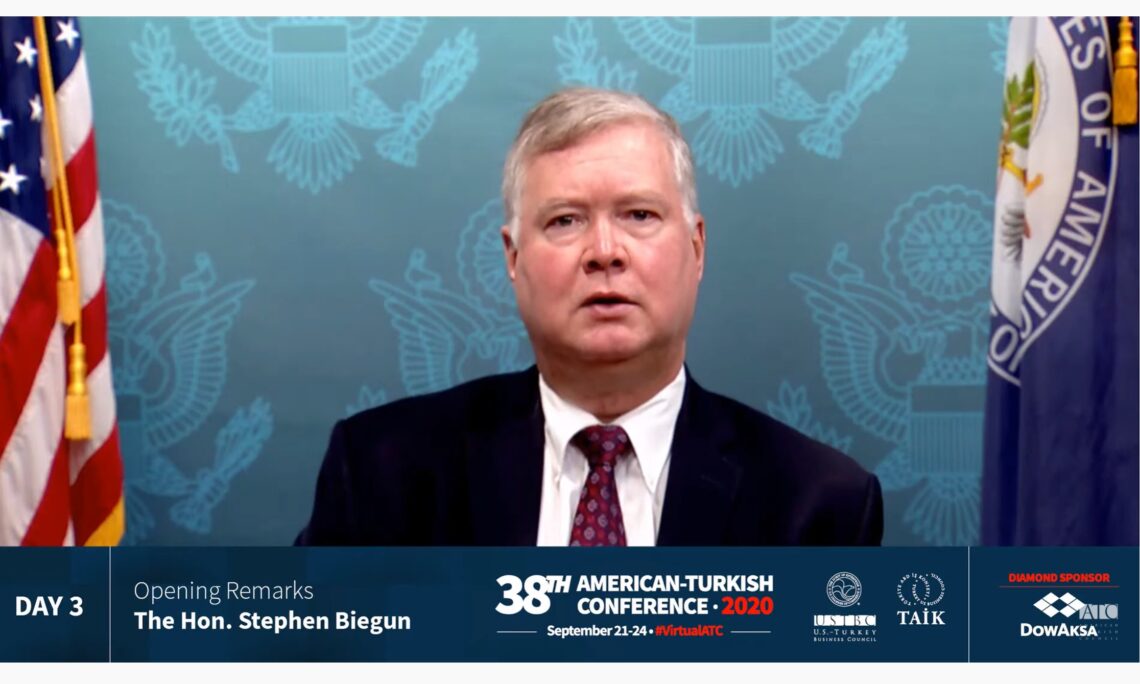 Thanks to the U.S. Chamber for inviting me to join you today for the 38th annual American-Turkish conference. It’s a pleasure to speak with you, and you’ll have the chance to continue the discussion with Under Secretary for Economics Keith Krach, who can speak more about how the United States is seeking to advance economic well-being across the globe.

I’m pleased to have this opportunity to highlight – alongside colleagues from the Turkish government – our decades of partnership as NATO Allies and our cooperation in a number of areas, including the commercial and people-to-people ties that bind our two countries together. We have a lot to build upon, but we also are in a period in which opportunistic and transactional decisions are straining the alliance. I’d like to spend some time today talking about how those of us who value the U.S.-Turkey relationship can reinforce our common strategic interests and democratic principles, and look for opportunities to reinforce our alliance relationship.

As this group well knows, bilateral trade underpins the U.S.-Turkey relationship: from our decades-long aerospace partnerships to new collaborations in the tech sector. Amid the human cost and global economic disruptions of the global COVID-19 pandemic, U.S.-Turkish cooperation has been a vital success: Turkish manufacturing firms were quick to pivot toward the U.S. market and have supplied more than $110 million in personal protective equipment that healthcare workers needed to save American lives. To those of you here today involved in this tremendous effort, it is my honor to thank you.

Our two countries are also bound together by our commitment to collective defense through NATO. In the seven decades since Turkey joined the Alliance, nearly every aspect of the world has changed significantly. The threats we collectively face are myriad and have intensified. A strong U.S.-Turkey relationship is as important now as it has ever been.

As a more than nine-year civil war continues on Turkey’s border in Syria, Turkey faces security threats from terrorist groups like ISIS, as well as malign influence from Russia, Iran, and others.

Turkey and the United States are both members of the Global Coalition to Defeat ISIS. Though ISIS’s physical caliphate has been destroyed through our collective efforts, we still have important work to do together to ensure that ISIS and its affiliates are unable to reconstitute a territorial enclave or threaten our homelands, people, and interests.

I want to talk a little bit more about Russia here, because Russia’s malign activities across the Eastern Mediterranean are destabilizing and dangerous for both Turkey and the United States.

In Syria, the March 5 ceasefire in Idlib Province has saved lives and prevented further destabilizing displacement. The United States has strongly backed Turkey’s efforts to counter Syrian regime and Russian aggression in Idlib. The United States remains committed to working with Turkey to advance a political solution in Syria and ensuring the permanent defeat of ISIS.

Meanwhile, Russia has enabled the criminal Assad regime’s vicious campaign against the Syrian people. As noted repeatedly by the UN Commission of Inquiry, the regime continues to perpetrate crimes against humanity. The same body has stated that Russia, too, may be guilty of war crimes for attacks against civilians and civilian infrastructure.

In Libya, Russia and its proxy the Wagner Group have fueled the conflict to advance Russia’s geopolitical aims and create a permanent foothold in North Africa, potentially threatening our interests and those of our NATO Allies. The United States strongly urges the withdrawal of all foreign forces from Libya.

We are at a critical juncture in Libya right now – with cautious optimism on a nascent UN-facilitated intra-Libyan political process. We know Moscow may seek to derail these efforts. We therefore urge Turkey to actively support UN mediation, and to continue working through established international and alliance mechanisms, and not with unilateral deals. If Turkey seeks to be a positive influence in the region, its interests would be best served by aligning with the international community’s vision for peace. We must all support Libyan voices seeking an end to the conflict, with full respect for Libya’s sovereignty and territorial integrity.

In the fight against ISIS – and in Afghanistan, Iraq, and other places around the world where NATO Allies advance our collective security – the United States and Turkey are key partners for one another. This partnership serves both our interests, as well as those of our other 28 Allies.

In addition to the international arenas in which we’re partners, as you all know, American and Turkish business communities have worked together for positive outcomes in both our countries.

I and my counterparts in the Turkish government understand that our private sectors are eager to form close partnerships in the future.

Your work here today advances our joint goal of reaching $100 billion in annual bilateral trade – a goal to which President Trump and President Erdogan committed in 2019. This would represent a significant increase from our current trade volume of $27 billion. And it would be a game changer for Turkish firms, for U.S. businesses, and for consumers across the world.

Against this backdrop of opportunity, and on the foundation of almost 70 years as Allies, I am also compelled to be clear that there are significant and growing concerns in the United States in regard to a number of Turkish policies. In order to realize our relationship’s potential, we must work together to address and overcome these stress points and areas of fundamental disagreement. To list a few:

When Turkey procured Russia’s S-400 air defense system in July 2019, this added a significant stressor to the relationship. The S-400 is fundamentally incompatible with NATO systems, and especially with Turkey’s founding membership in the F-35 program. As a result, Turkey has been suspended from the F-35 partnership.

We also have expressed deep concern about rising tensions in the Eastern Mediterranean. Conflict between our NATO Allies Turkey and Greece only benefits common adversaries who seek to sow division and Transatlantic disunity. We urge Turkey to cease provocative maritime operations and steps that are raising tensions in the region.

In recent days, we welcomed Ankara’s de-escalatory actions, including the return of Turkish ships from areas subject to competing claims. We hope to see continued bilateral talks between Turkey and Greece to further reduce tensions, and we encourage both countries to continue working through NATO toward a technical agreement on de-confliction measures. Countries in the region must resolve their disagreements diplomatically and peacefully.

More broadly on maritime issues, we remain deeply concerned by Turkey’s drilling activity in waters off Cyprus. Such activity also continues to raise tensions unacceptably. While the United States does not take a position on how other countries delimit their maritime boundaries, this should be done through peaceful dialogue, and not through provocative, unilateral action.

We object to Turkey’s continued engagement at the highest levels with Hamas – a U.S. designated foreign terrorist organization – which harms Turkey’s standing in the international community.

Finally, we remain gravely concerned by democratic backsliding in Turkey, including indictments of leaders from civil society, media, political opposition, and business, along with their prolonged pretrial detentions. The rights to freedom of expression, peaceful assembly, and association are fundamental values for any democracy. These freedoms are also important to Turkey’s vitality and its growth as a vibrant, knowledge-based economy.

I encourage our Turkish partners to take seriously these concerns, but also to understand they come from an Ally and friend that seeks to preserve and deepen our relationship in every dimension. But this will best succeed with a reaffirmation of the shared interests and shared values that have united us for the past 70 years.

Let me again thank the U.S.-Turkey Business Council and the Turkey-U.S. Business Council for the opportunity to address the American-Turkish Conference. Your organizations have a pivotal role to play in helping strengthen the U.S.-Turkey relationship. A strong Turkey anchored in the West makes for a strong NATO, a strong bilateral economic relationship, and a partnership rooted in democratic principles.

Both the United States and Turkey need your strong voices, your relationships, and your insights to help our governments work through the strategic security challenges we face together, and to enhance our bilateral relationship. A strong U.S.-Turkey bilateral relationship rooted in democratic principles will serve as an important reinforcement to the NATO treaty that binds us.

Thank you for your dedication to this relationship.