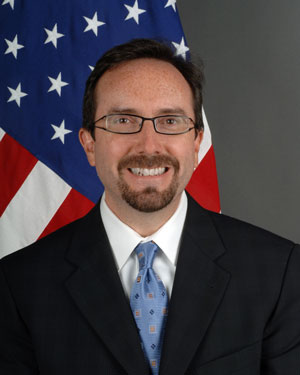 John Bass was confirmed by the U.S. Senate on September 17, 2014 as the U.S. Ambassador to Turkey.

A career Senior Foreign Service officer, he served as Executive Secretary from 2012 to 2014, and U.S. Ambassador to Georgia from 2009 to 2012.  He began his diplomatic career in 1988 and has also served in positions in U.S. missions in Iraq, Italy, Belgium and Chad.

In Washington, Ambassador Bass’s assignments have included service on Vice President’s Cheney’s staff, as Chief of Staff and advisor to Deputy Secretary of State Strobe Talbott, as Director of the State Department’s Operations Center and in several assignments focused on European security issues.  He has received numerous State Department performance awards.

The son of a public servant and a U.S. Air Force officer, Bass was born and raised in upstate New York.  Prior to joining the Foreign Service, Bass worked as a newspaper editor and as a political campaign consultant.  A graduate of Syracuse University, he speaks Italian and French.  He is married to U.S. diplomat Holly Holzer Bass, and they share their home with “Tako,” a Georgian Shepherd they adopted in Tbilisi.