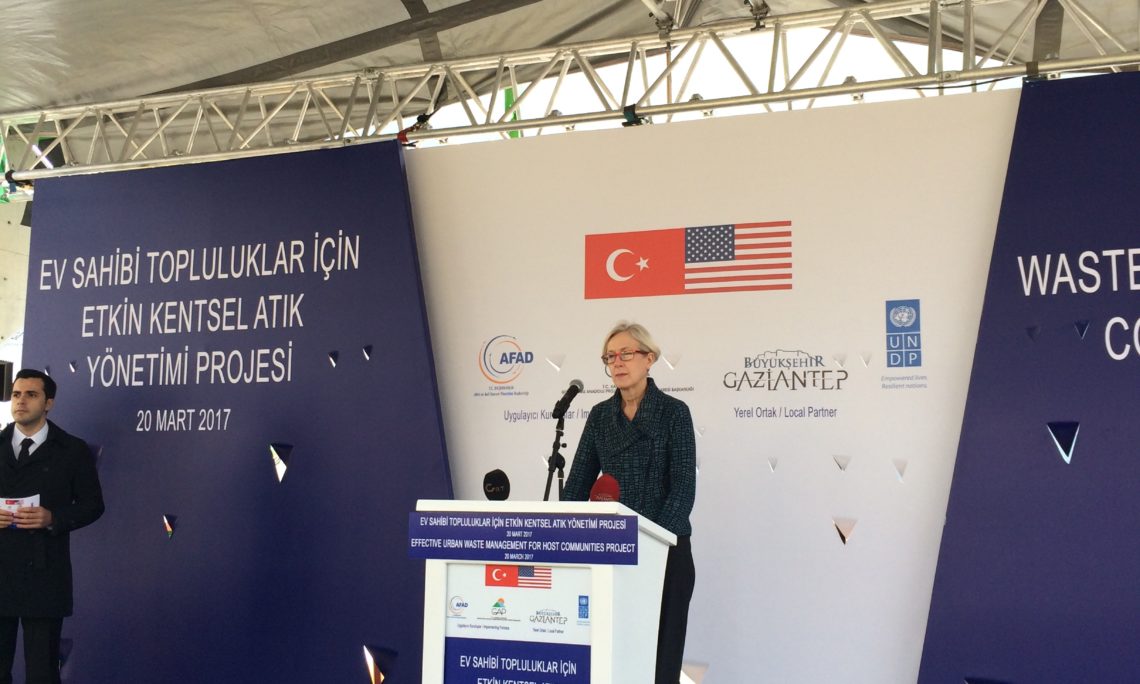 On March 20, Adana Consul General Linda Stuart Specht joined Gaziantep Metropolitan Municipality Secretary General Deniz Köken, Islahiye District Governor Ramazan Yıldırım, Islahiye Mayor Kemal Vural, along with UNDP’s Country representative Claudio Tomasi to inaugurate a waste transfer station in Fevzipaşa, Gaziantep. The waste transfer station is part of a $ 3 million project, funded by the United States and implemented by the UNDP in partnership with the Gaziantep Metropolitan Municipality, GAP Regional Administration and the Prime Ministry Disaster and Emergency Management Authority (AFAD).  The facility will help prevent the use of open dumpsites in Gaziantep province, particularly in Islahiye and Nurdagi districts, and will relieve the pressure faced by the Gaziantep Municipality in waste collection and management.

The project aims to reduce the burden on the host communities in terms of waste management due to heavy Syrian population influx into Southeastern Anatolia Region.  The large number of Syrians staying in the Southeast Anatolia region of Turkey, has been increasingly straining the capacities of local municipalities to provide the required services for the Syrians in addition to the needs of the host communities.

The United States applauds the Turkish government’s strong support for refugees who have spent the last six years in exile.  We share the understanding that after six long years, refugees who fled the conflict in Syria need to build a decent life for themselves and their children.  We also recognize the tremendous responsibility that the Turkish people, local communities, and municipalities have shouldered in hosting refugees.  It is our hope that projects such as this one will help communities to strengthen the infrastructure needed to host refugees.