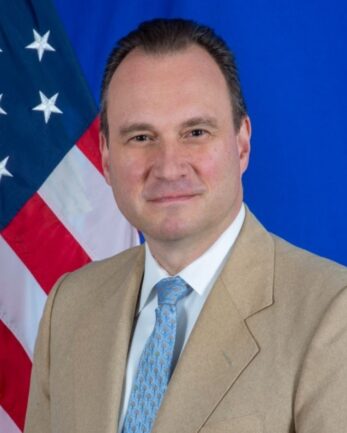 Scott M. Oudkirk began his assignment as Deputy Chief of Mission at the U.S. Embassy in Ankara, Turkey in July 2021. He came to Ankara after serving as the Director of the Department of State’s Office of Iranian Affairs from 2018 to 2020.  From 2013 to 2016, his work focused on Iraq and the counter-ISIS campaign, first as the Deputy Political Counselor at Embassy Baghdad and successively as Deputy Director and Acting Director of the State Department’s Office of Iraq Affairs.

A career member of the Senior Foreign Service, Mr. Oudkirk previously served in both Ankara and Istanbul for seven years across two assignments and extended temporary duty. He has also served at the National Security Council, as well as in China and Jamaica.

Prior to receiving his Foreign Service commission in 1998, he worked for the Commerce Department’s International Trade Administration and for the General Electric Company. A graduate of Georgetown University’s School of Foreign Service, Mr. Oudkirk also holds Master’s degrees from Columbia University and the National Defense University’s Eisenhower School. Mr. Oudkirk is married to Sandra Oudkirk, the Director of the American Institute in Taiwan, and is the father of three children, all of whom were born in Turkey.