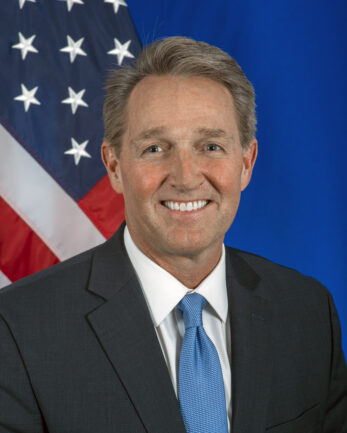 Ambassador Flake was nominated by President Biden on July 13, 2021, to be the next U.S. Ambassador to Turkey.  He was confirmed by the U.S. Senate on October 26, sworn in by Vice President Kamala Harris on December 10, and assumed office upon his January 2022 arrival in Turkey.

Ambassador Flake served as a United States Senator representing the State of Arizona from 2013-2019, prior to which he represented Arizona as a Member of Congress from 2001-2013.  While in the Senate, he served on the Foreign Relations, Energy and Natural Resources, and Judiciary Committees and the Select Committee on Aging.  He was chairman of the Senate’s sub-committees on Africa & Global Health Policy, and Privacy, Technology & the Law.  While in the U.S. House of Representatives, he served on the Appropriations Committee.

Most recently, Flake served as a Distinguished Dean Fellow at Arizona State University and a Distinguished Fellow at the Sorensen Center for Moral and Ethical Leadership at Brigham Young University.  He also served on the Senior Advisory Committee at Harvard University’s highly prestigious Institute of Politics.  A frequent public speaker, Flake also has been a contributor for CNN and CBS News.

Flake earned a B.A. in International Relations and an M.A. in Political Science at Brigham Young University.  He is a recipient of the Gold Medal of Honorary Patronage from the University Philosophical Society, Trinity College, Dublin, Ireland.  Flake spent time in Zimbabwe and in South Africa as a missionary, where he learned to speak Afrikaans.

Flake is married to Cheryl Flake (née Bae), and they have five children.