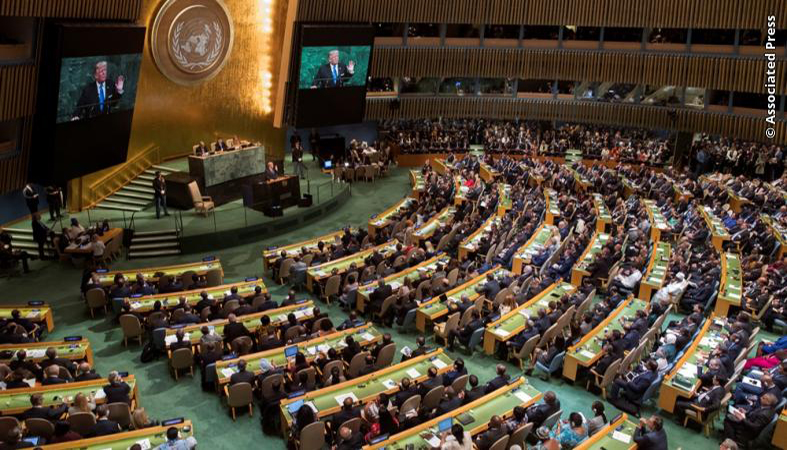 U.S. President Donald J. Trump delivered remarks at the 72nd Session of the United Nations General Assembly in New York City on September 19, 2017. Addressing some of the very serious threats the world faces the President began his remarks by outlining growing dangers that threaten our values. “We meet at a time of both of immense promise and great peril.  It is entirely up to us whether we lift the world to new heights, or let it fall into a valley of disrepair. We have it in our power, should we so choose, to lift millions from poverty, to help our citizens realize their dreams, and to ensure that new generations of children are raised free from violence, hatred, and fear,” he stated.

The President underscored the importance of global leaders coming together in the interest of all people noting, “All responsible leaders have an obligation to serve their own citizens, and the nation-state remains the best vehicle for elevating the human condition. But making a better life for our people also requires us to work together in close harmony and unity to create a more safe and peaceful future for all people.”

President Trump appealed to all global leaders to fulfill their sovereign duties to the people they represent in order to lift up our citizens. “We must protect our nations, their interests, and their futures.  We must reject threats to sovereignty, from the Ukraine to the South China Sea. We must uphold respect for law, respect for borders, and respect for culture, and the peaceful engagement these allow.  And just as the founders of this body intended, we must work together and confront together those who threaten us with chaos, turmoil, and terror.”

On North Korea and Iran

The President addressed the need for the global community to come together and address the threat posed by North Korea. “It is time for North Korea to realize that the denuclearization is its only acceptable future,” he said. “The United Nations Security Council recently held two unanimous 15-0 votes adopting hard-hitting resolutions against North Korea, and I want to thank China and Russia for joining the vote to impose sanctions, along with all of the other members of the Security Council.  Thank you to all involved.  But we must do much more.  It is time for all nations to work together to isolate the Kim regime until it ceases its hostile behavior.”

One challenge @POTUS highlighted at #UNGA is #NorthKorea. pic.twitter.com/6zrnq9avmI

The President also discussed threats posed by the Iranian government noting, “We cannot let a murderous regime continue these destabilizing activities while building dangerous missiles, and we cannot abide by an agreement if it provides cover for the eventual construction of a nuclear program.”

Another challenge @POTUS addressed at #UNGA is #Iran. pic.twitter.com/NXXcHoJ90C

On Terrorism and Syria

Pivoting to the global fight on terrorism the president said, “We will stop radical Islamic terrorism because we cannot allow it to tear up our nation, and indeed to tear up the entire world.” He continued, “We must deny the terrorists safe haven, transit, funding, and any form of support for their vile and sinister ideology. We must drive them out of our nations.  It is time to expose and hold responsible those countries who support and finance terror groups like al Qaeda, Hezbollah, the Taliban and others that slaughter innocent people.”

.@POTUS to #UNGA on #Terrorism: All responsible nations must work together to confront terrorists. pic.twitter.com/VaBU3nMqaU

The President underscored that the United States seeks to de-escalate the Syrian conflict, and wants a political solution that honors the will of the Syrian people.  “The actions of the criminal regime of Bashar al-Assad, including the use of chemical weapons against his own citizens — even innocent children — shock the conscience of every decent person.  No society can be safe if banned chemical weapons are allowed to spread.”  President Trump applauded the United Nations agencies providing vital humanitarian assistance in areas liberated from ISIS, as well as nations like Jordan, Turkey and Lebanon for their role in hosting refugees from the Syrian conflict.

.@POTUS to #UNGA on #Syria: We seek the de-escalation of the conflict and a political solution that honors the will of the Syrian people. pic.twitter.com/cpi2SXAett

On His Vision for the United Nations

The President emphasized the importance of burden sharing at the United Nations. “The American people hope that one day soon the United Nations can be a much more accountable and effective advocate for human dignity and freedom around the world.  In the meantime, we believe that no nation should have to bear a disproportionate share of the burden, militarily or financially. Nations of the world must take a greater role in promoting secure and prosperous societies in their own regions.”

As he concluded his remarks, the President reflected on the United States’ historic role as a force for good around the world and as one of the greatest defenders of sovereignty, security, and prosperity for all. President Trump called for a reawakening of nations as we take on the task of addressing our shared challenges.

.@POTUS at #UNGA: We will fight together, sacrifice together and stand together for #peace, #freedom, #justice, #humanity. pic.twitter.com/GBrcnbLnVL

Calling for unity, the President shared his vision for a “world of proud, independent nations that embrace their duties, seek friendship, respect others, and make common cause in the greatest shared interest of all — a future of dignity and peace for the people of this wonderful Earth.”

“This is the true vision of the United Nations,” he said.

President Trump Addresses the 72nd Session of the UNGA