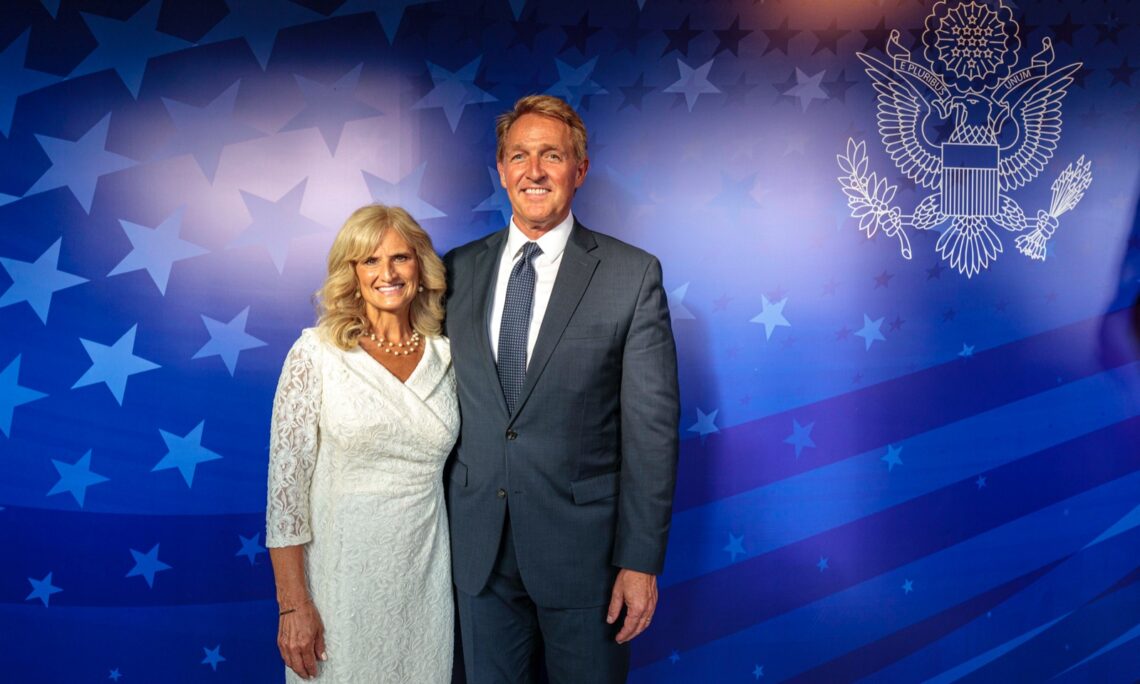 It’s my pleasure to be here with my wife Cheryl, with our son Dallin, our daughter Alexis and her husband Jason, and their children, Wells and Coco and Bridget. So, we have five children and five grandchildren. That’s how I got elected. But it is wonderful for Cheryl and me to be here in Istanbul and to commemorate the anniversary our country’s independence with you.

Just before we were married, Cheryl had the great fortune to come to Türkiye with a performing group from Brigham Young University called the Young Ambassadors.

So, coming to Türkiye as an old ambassador, I feel our journey has come full circle. It’s my absolute honor to represent my country in such a consequential post as Türkiye, a country that always finds itself in the center of things, both politically and geographically.

Since our G.I.s and your Mehmetçiks fought shoulder to shoulder to repel a war of aggression in Korea, America and Türkiye have worked together to defend the independence and freedom of other nations from Korea to Kuwait to Kosovo.

Let me tell you of a fascinating connection between Türkiye and my home state of Arizona. Turkiye in 1828 was the birthplace of Philip Tedro, who after making the pilgrimage to Mecca became known as Hadja Ali.

Hadja Ali was a camel breeder and trainer hired by the United States Army in 1856 to introduce camels to transport cargo across the great American desert. In fact, most of the camels for the project came from Türkiye.

The experiment ultimately failed, largely because the Army’s burros, horses and mules didn’t get along with the large camels. Hadja Ali ultimately released his camels into the Arizona desert, where they roamed free for decades.

As for Hadja Ali, he married and settled down in the small town of Quartzsite. The locals, who had a hard time pronouncing the name, Hadja Ali, dubbed him “Hi Jolly” and the legend was born.

To this day, Quartzsite honors its most famous and colorful resident at the Hi Jolly Festival every January. Search YouTube you can find several versions of the song “Hi Jolly” written in his honor.

And every night, young children in my home state are entertained with campfire stories about rogue camels who once roamed the Arizona desert.

We are here today to celebrate independence. Just how important is it to be independent? The great founding father of this nation, Mustafa Kemal Atatürk, said “it would be better for [the Turkish] nation to perish than to live in captivity. Independence or death!” The same animating principle guided our founding fathers in their quest for independence.

There is hardly a schoolchild in America who has not heard Patrick Henry’s famous words: “Is life so dear, or peace so sweet, as to be purchased at the price of chains and slavery? I know not what course others may take, but as for me, give me liberty or give me death!”

As we reflect on Türkiye’s strong condemnation of Russia’s invasion of Ukraine, we can’t help but think of the Ukrainians’ catchy fight song – their own Yankee Doodle – called “Bayraktar,” a tribute to the remarkable progress of Turkish engineering.

Of course, with $28 billion in trade last year between the U.S. and Türkiye – a more than 30 percent increase over the prior year – it’s not just security ties that bind our two countries.

In the cultural and education sectors, we are proud to be the most chosen destination for Turkish students studying abroad. In fact, Türkiye is the leading source of European students in the United States.

On Independence Day, especially, it is appropriate to highlight the importance of education. One of our founding fathers, John Adams, wrote to his wife Abigail with the revolution in full swing, “I must study politics and war,” he said, “that my sons may have liberty to study mathematics and philosophy.”

Türkiye’s founding father was similarly farsighted when he said, “after the triumph we obtained with bayonets, weapons and blood, we will strive to succeed in fields such as culture, science, scholarship and economics.” I think it’s fair to say that both our nations have done just that!

My wife, the Young Ambassador, and I, the old Ambassador, absolutely love being here in Türkiye. To be among such wonderful, generous and kind people in this ancient land is a dream come true for us.

Still, as we celebrate American Independence Day, our hearts belong to that young, upstart country across the Atlantic that is a mere 246 years old on July 4th.

Whenever Cheryl and I fly west above that vast sea that separates our two countries, we remember the poem written more than a century ago by an American immigrant making a similar, if slower and more arduous journey to the new world. The poet wrote:

Tis fine to see the old world, and travel up and down
Among the famous palaces and cities of renown
To admire the crumbling castles and the statues of the kings
But now I think I’ve had enough of antiquated things
So, it’s home again and home again, America for me

My heart is turning home again, that’s where I long to be
In the land of youth and freedom, beyond the ocean bars
Where the air is full of sunlight and the flag is full of stars
Oh, it’s home again and home again, America for me