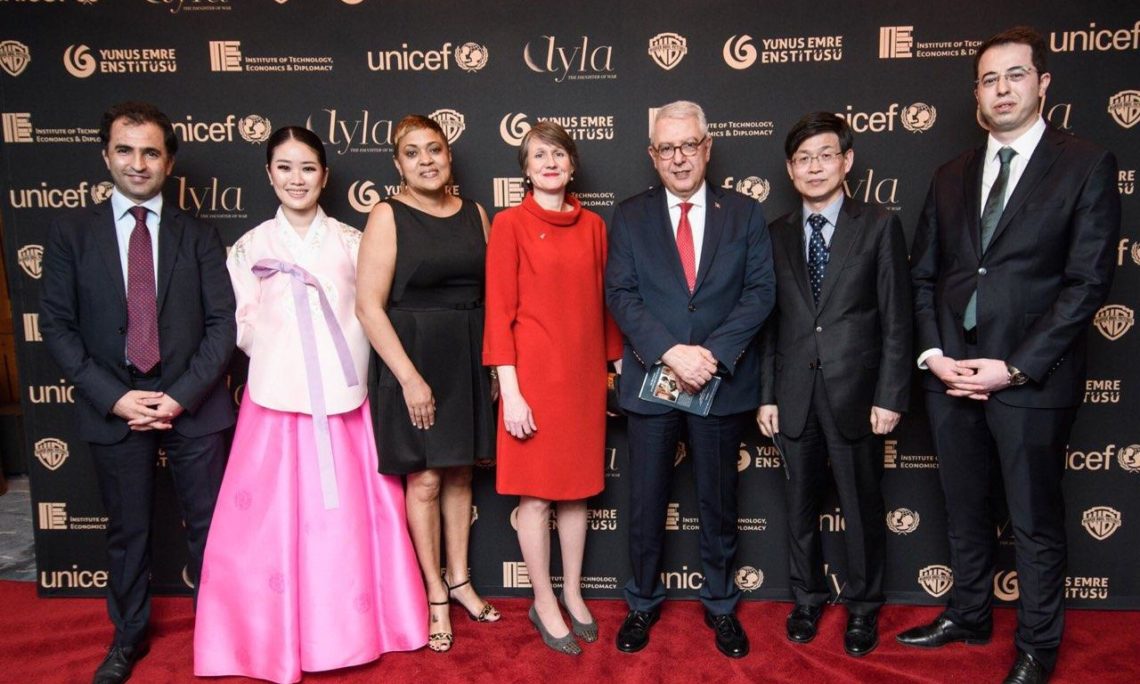 Thank you for your kind introduction and for inviting me to speak at today’s screening of Ayla: The Daughter of War.  Before I begin, I would like to recognize the other dignitaries present, including the American Legion Executive Director Verna Jones, Ambassador Serdar Kılıc of the Republic of Turkey, Gokhan Coskun, CEO at the Institute of Technology, Economics and Diplomacy, and Halid Bulut, Principal of the Yunus Emre Institute.

The bonds of the U.S.-Republic of Korea Alliance were forged in the bloodshed of the Korean War.  Over 2 million American citizens participated in the war and some 33,000 fell victim to the conflict – a significant number, though tiny in comparison to the estimated 1.2 million Koreans – North and South – who perished.

As strong as our bonds have become, we were not alone in Korea.  Our presence was part of a broader UN force that eventually included troops from twenty-one different countries, including Turkey.  Events like this gala are opportunities to remember our shared history and causes we have championed and fought for together – and to reaffirm our shared values as evidenced by a long history of partnership and friendship.

The Turkish Brigade served with distinction alongside American forces in Korea, earning unit citations for their bravery and fighting ability.  The U.S. Commander in Chief Douglas MacArthur remarked that “the heroism shown by the Turks has given hope to the American nation.  It has inculcated them with courage.  The American public fully appreciates the value of the services rendered by the Turkish Brigade…and because of them the United Nations Forces in Korea were saved from encirclement…by the heroism shown by the Turks.”

While the Turkish Brigade was revered for their skill and courage in combat, this film – recounting the story of a Turkish sergeant who befriended a girl orphaned by the war – reminds us of our shared humanity in the face of violence.  It is a heartbreaking story that deserves to be told and retold, and fittingly stories like this from the Korean War are still taught in Turkish schools.

As Under Secretary for Political Affairs Tom Shannon noted, he had the great pleasure of traveling to Seoul last year and seeing with his own eyes how the Republic of Korea rebuilt its country from the rubble of war into one of the most advanced and vibrant democracies in the world.  But we can’t forget that this kind of creativity, productivity, and enterprise have been able to flourish because of the safety and stability provided by a government and armed forces committed to protecting Korean sovereignty and democracy.  There’s still a lot of work to be done.  And that’s why we’re working closely with the Republic of Korea and other partners around the world to fully realize our shared goal of denuclearizing the Korean Peninsula.

In closing, I would like to thank the Yunus Emre Institute and Inted – the Institute of Technology, Economics and Diplomacy – for your work in bringing this story to the big screen and sharing this story with us today.  May we always remember that stories such as these, which emanate from the darkest days of war can remind us to be the best possible version of ourselves.  Thank you for inviting me here tonight – I look forward to the film.