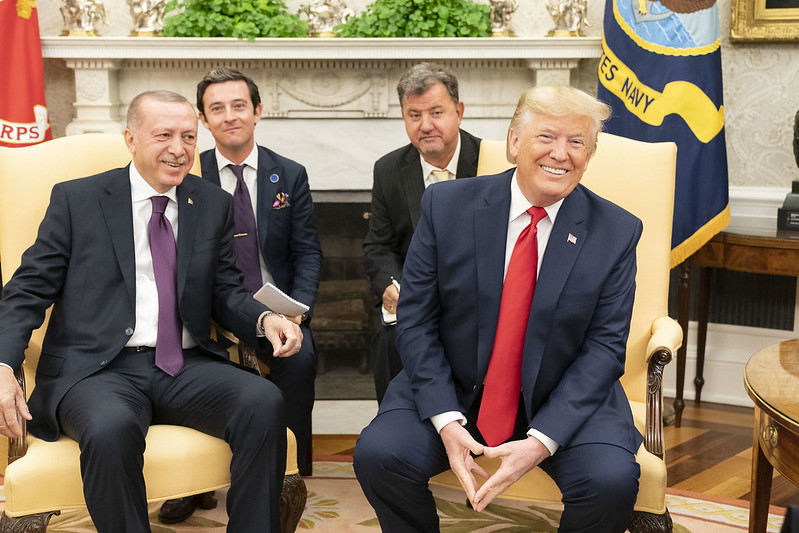 As you know, we’ve pulled back our troops quite a while ago, because I think it’s time for us not to be worried about other people’s borders. I want to worry about our borders. We’ve got plenty of borders to worry about.

I want to thank the President for the job they’ve done. Again, this has been thousands of years in the process, between borders, between these countries and other countries that we’re involved with, 7,000 miles away. So, we want to worry about our things.

We’re keeping the oil. We have the oil. The oil is secure. We left troops behind, only for the oil.

And I have to just finish by saying that the President and I have been — we’ve been very good friends. We’ve been friends for a long time, almost from day one. And we understand each other’s country. We understand where we’re coming from. I understand the problems that they’ve had, including many people from Turkey being killed in the area that we’re talking about. And he has to do something about that, also. It’s not a one-way street.

So, I just want to say it’s a great honor to have you both and thank you very much. Thank you.

PRESIDENT TRUMP: You, go ahead, please. Would you like to say something?

PRESIDENT ERDOĞAN: Thank you. (As interpreted.) Well, Mr. President, thank you. In a few moments, we shall be having a larger-scale press meeting, that’s why I don’t feel the need to come up with longer statements here.

PRESIDENT TRUMP: Okay, well, that was good. That’s good. It’s true. A lot of truth to that.

I will say, we’re also talking about a trade deal. We do, proportionately, very little trade with Turkey. They make great product. We make the greatest product in the world. And, frankly, we’re going to be expanding our trade relationship very significantly. We think we could be doing $100 billion with Turkey. And right now we’re doing about $20 billion. But we think that number should be easily $100 billion, which would be great for Turkey and good for us.

So, we’re going to be expanding. We have our people from Commerce here. That’s one of the meetings we’ll be having. And having that big relationship, I think, is a very good one. So, we think we can bring trade up very quickly to about $100 billion between our countries. Okay?

Q What do you do, Mr. President, about the S-400s, in terms of getting that trade deal?

Q Are you satisfied with the ISIS fighters that Turkey is keeping an eye on? Are you happy so far with the progress?

PRESIDENT TRUMP: Turkey is watching the ISIS fighters. When I became President, ISIS was all over the place. I had no idea to the extent. In fact, it was shown to me about a month ago. We came in. It was a mess. And we took over 100 percent of the caliphate.

And, last week, as you know, we killed its leader and its founder. And we’re very proud of that fact. And we’ve also knocked out number two. And we have our eye out on number three, who was supposed to become number one, but he’s running right now. He’s running for his life, but we have our sights right on him.

So, we are — we’re doing very well. ISIS is very much — very much a factor that’s different than it was when I took over. When I took over, thousands and thousands of ISIS fighters were all over. Now they’re mostly imprisoned.

Q Is there any way, Mr. President, that Turkey can possess both S-400s and F-35s? Or are those things mutually exclusive?

PRESIDENT TRUMP: Well, John, we’re going to be talking about that. So, we’ll — we’ll talk about it. We may report to you later on about that because we’re having a second meeting in a little while.

So, we’ll see you in a little while. We’re going to be having press conference of sorts in a little while. It’s an honor to have the President and Mrs. Erdoğan with us, and they’re highly respected in their country and in the region. And we’ll see what we can do. But the relationship that we’ve had is good.

And, you know, I’ve heard all the pundits — three, four, five weeks ago. They were against what I’ve — what I did. Now, all of a sudden, they’re saying, “Wow. That’s really working well. Why are we guarding other country’s borders? We want to take care of our country.” And they’re saying it really is surprising what’s happened. Plus, we have our troops out of there, and we’ll be bringing a lot of them back home. But again, we’re keeping the oil.

Thank you very much, everybody. Thank you.

PRESIDENT TRUMP: Thank you. No, I didn’t.

Q You didn’t watch any of it at all?

PRESIDENT TRUMP: I didn’t — I did not watch it.

Q Have you been briefed on what’s —

Q Have you been briefed?

Thank you very much, everybody. Thank you.