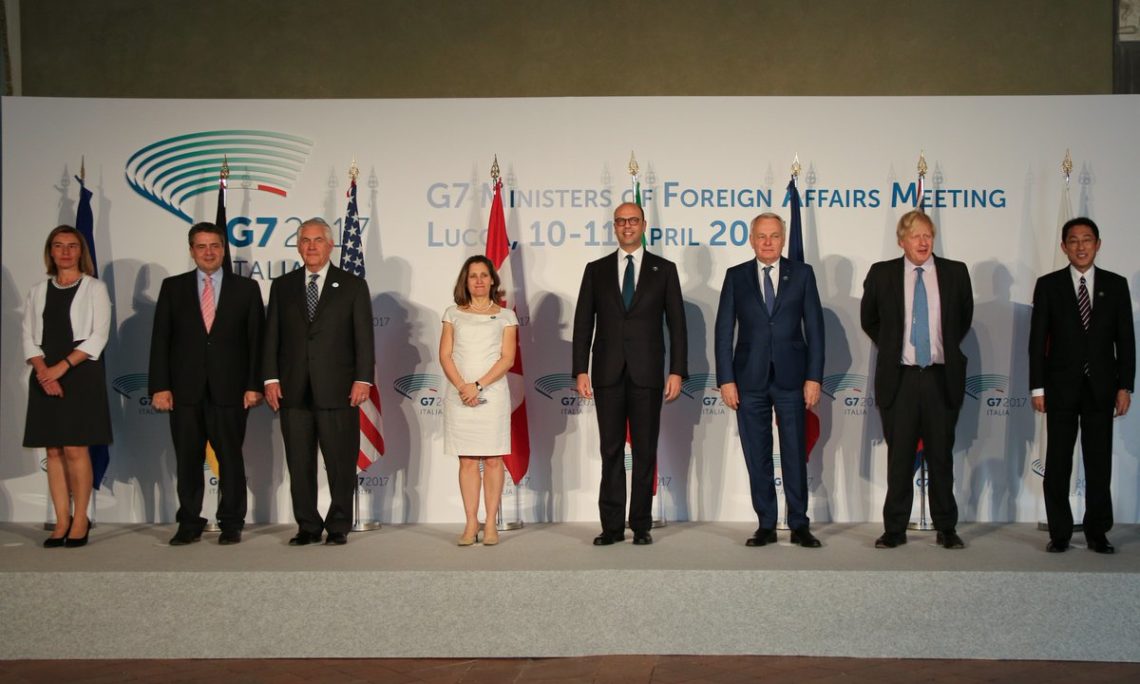 Remarks at a Press Availability

SECRETARY TILLERSON: Good morning. I’ve got a statement. I want to share it first, and then I’m happy to take a couple of questions.

Last week, Bashar al-Assad’s regime killed even more of its own people using chemical weapons. Our missile strike in response to his repeated use of banned weapons was necessary as a matter of U.S. national security interest. We do not want the regime’s uncontrolled stockpile of chemical weapons to fall into the hands of ISIS or other terrorist groups who could, and want to, attack the United States or our allies.

Nor can we accept the normalization of the use of chemical weapons by other actors or countries, in Syria or elsewhere. The U.S. is grateful for the statements of all of our partners who have expressed support for our timely and proportional response. As events shift, the United States will continue to evaluate its strategic options and opportunities to de-escalate violence across Syria.

Many nations look to the Geneva process to resolve the Syrian conflict in a way that produces stability and gives Syria and the Syrian people the opportunity to determine their own political future. And our hope is Bashar al-Assad will not be a part of that future. If the Astana ceasefire negotiations become effective towards achieving a durable ceasefire, then the Geneva process has the opportunity to accelerate. To date, Astana has not produced much progress.

It is also clear Russia has failed to uphold the agreements that had been entered into under multiple UN Security Council resolutions. These agreements stipulated Russia as the guarantor of a Syria free of chemical weapons, that they would also locate, secure, and destroy all such armaments in Syria. Stockpiles and continued use demonstrate that Russia has failed in its responsibility to deliver on this 2013 commitment. It is unclear whether Russia failed to take this obligation seriously or Russia has been incompetent, but this distinction doesn’t much matter to the dead. We can’t let this happen again.

To be clear, our military action was a direct response to the Assad regime’s barbarism. The United States priority in Syria and Iraq remains the defeat of ISIS. We are calling on our G7 partners to sustain the fight against ISIS well after the liberation of Mosul and Raqqa. Whether in Iraq and Syria, online, or on the ground in other countries, we must eliminate ISIS. G7 support will be critical. To stabilize Syria we will need the G7’s direct participation helping settle the conflict in Syria, protecting the civilian population, and committing to reconstruction that eventually will lead to normalcy for a unified Syria.

Happy to take a question or two.

QUESTION: Sir, obviously, over the last day or so there’s been some conflicting messages coming out of the administration, from Sean Spicer, from yourself. Is this a little bit of growing pains? Can you settle some of those conflicts here in terms of messaging, in terms of whether you want Bashar al-Assad out now, later; whether this was a humanitarian intervention or one based upon the national security interests of the United States; whether you will intervene only in chemical weapons or barrel bombs – all the rest?

SECRETARY TILLERSON: Well, I think as I just indicated, the strike that was undertaken was in direct response to the use of the chemical weapons by the Syrian regime under the leadership of Bashar al-Assad. And as I indicated, we do believe that it is in the national interest because of the threat that unsecured chemical weapons pose given the chaotic conditions on the ground in Syria. We have a fight going on against ISIS, we have an internal civil war, we have a large presence of al-Qaida individuals, so it is important to us that whatever weapons are there are found, are secured, and destroyed ultimately.

In terms of the future of Bashar al-Assad, it is important to us that we undertake a political process that leads to the final conclusion of how Syria will be governed. It is our policy for a unified Syria that is governed by the people of Syria. I think it is clear to all of us that the reign of the Assad family is coming to an end; but the question of how that ends and the transition itself could be very important, in our view, to the durability, the stability inside of a unified Syria, and its stability and durability of the outcome going forward.

So that’s why we are not presupposing how that occurs, but I think it is clear that we see no further role for the Assad regime longer-term given that they have effectively given up their legitimacy with these type of attacks.

QUESTION: We all in this room have followed Secretary Kerry around and saw in Geneva and other places how he repeatedly pressed Russia to step off its support for the Assad regime, and many, many times, obviously, failed to get them to do that. What makes you think that this time will be different? What are you taking to Moscow that you think will finally effect that change that the U.S. has been pushing for for so many years?

I think it’s also worth thinking about Russia has really aligned itself with the Assad regime, the Iranians, and Hizballah. Is that a – is that a long-term alliance that serves Russia’s interest, or would Russia prefer to realign with the United States, with other Western countries and Middle East countries who are seeking to resolve the Syrian crisis?

We want to relieve the suffering of the Syrian people. We want to create a future for Syria that is stable and secure. And so Russia can be a part of that future and play an important role, or Russia can maintain its alliance with this group, which we believe is not going to serve Russia’s interest longer-term. But only Russia can answer that question.

MODERATOR: Ladies and gentlemen, thank you very much.