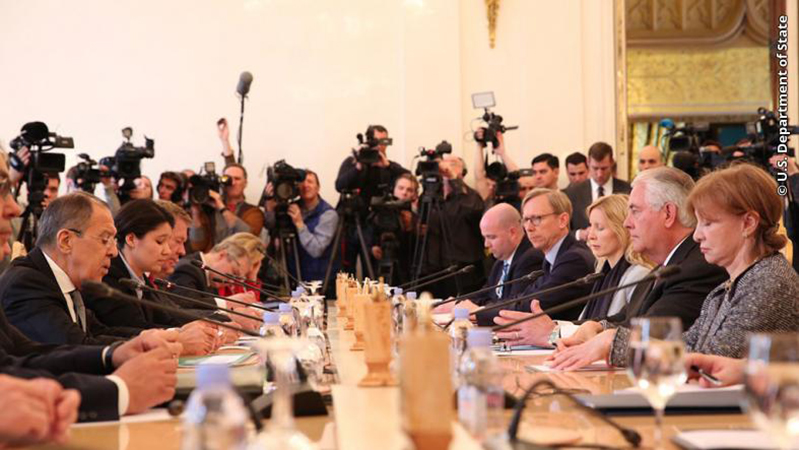 Russian Foreign Minister Lavrov gives opening remarks ahead of a bilateral meeting with U.S. Secretary of State Rex Tillerson and his delegation in Moscow, Russia, on April 12, 2017.

Today U.S. Secretary of State Rex Tillerson met with Russian Foreign Minister Sergey Lavrov and Russian President Vladimir Putin in Moscow, Russia. Secretary Tillerson discussed a range of global issues and challenges including counterterrorism efforts, cyberspace, and bilateral relations as well as other areas of common interest such as the Democratic People’s Republic of Korea (DPRK), Ukraine, and Syria. This trip is part of an effort to maintain direct lines of communication with senior Russian officials and to ensure U.S. views are clearly conveyed, including on next steps in Minsk implementation.

Ahead of his meeting with Foreign Minister Lavrov, Secretary Tillerson said, “Our meeting today comes at an important moment in the relationship so that we can further clarify areas of common objectives, areas of common interest, even when our tactical approaches may be different, and to further clarify areas of sharp difference so that we can better understand why these differences exist and what the prospects for narrowing those differences may be.”

Following these statements Secretary Tillerson held a series of bilateral meetings with Russian Foreign Minister Lavrov and President Putin. In a statement to the press following these meetings, Secretary Tillerson noted challenges in the current state of U.S.-Russia relations and explained that the day’s meetings centered around approaches to improve communication on a range of issues.

Secretary Tillerson and Foreign Minister Lavrov agreed to consider further proposals made about the way forward in Syria, including consulting with allies and coalition members. The Secretary acknowledged, “We both believe in a unified and stable Syria, and we agree we want to deny a safe haven for terrorists who want to attack both of our countries.”

Secretary Tillerson discussed the role for Bashar al-Assad and the Assad regime in the future of Syria with his counterparts at length. During the press event Tillerson said, “Our view is that the reign of the Assad family is coming to an end, and they have again brought this on themselves with their conduct of the war these past few years. We discussed our view that Russia, as their closest ally in the conflict, perhaps has the best means of helping Assad recognize this reality. We do think it’s important that Assad’s departure is done in an orderly way – an orderly way – so that certain interests and constituencies that he represents feel they have been represented at the negotiating table for a political solution.”

The two foreign ministers also discussed the current threats posed by the DPRK regime, including the regime’s ongoing development of their nuclear program, and the constructive role Russia can play in encouraging the regime in DPRK to change its course. Secretary Tillson also recognized the importance of the Minsk Accords in addressing concerns regarding Ukraine. “Russia can make progress in implementation by de-escalating violence and taking steps to withdraw separatist armed forces and heavy weapons so that OSCE observers can fulfill their role. Until full progress is made under the Minsk Accords, the situation in Ukraine will remain an obstacle to improvement in relations between the U.S. and Russia,” said Secretary Tillerson.

During his remarks, Secretary Tillerson noted that the United States and Russia have agreed to establish a working group to address common interests and make progress toward stabilizing the relationship so the two nations can begin address more serious concerns.