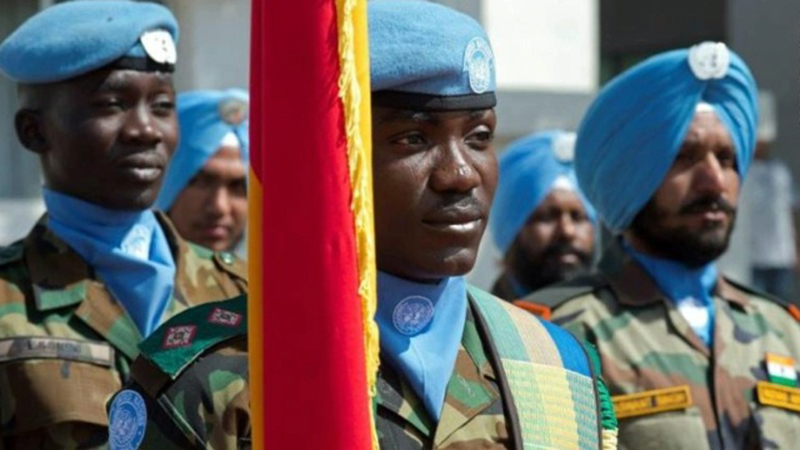 The United Nations Interim Force in Lebanon (UNIFIL) observed the International Day of UN Peacekeepers in a ceremony held at its Naqoura headquarters in southern Lebanon. [Photo courtesy of the United Nations]

In honor of International Day of UN Peacekeepers, I wanted to recognize the courageous and dedicated men and women around the world who don the blue helmet and risk everything so that others might live in peace. We honor the vital role these men and women play in curbing violent conflicts and preventing suffering around the world, and reiterate America’s commitment to supporting, training, and equipping the international forces who make these vital missions possible.

Peacekeeping missions are a critical tool for promoting peace and reconciliation in some of the world’s most troubled countries. Today, more than 113,000 UN personnel from 124 countries serve in peacekeeping roles in 16 missions around the world — in Africa, the Middle East, the Caribbean, and Europe. The diverse, robust, and demanding mandates of each of these missions see peacekeepers working to contain violent groups, protect civilians, bolster stability, and promote health and well-being.

The United States supports the purpose and spirit of UN peacekeeping missions and recognizes that the building blocks of an effective peacekeeping force are well-trained, disciplined, and properly equipped security forces. Programs like the Global Peace Operations Initiative (GPOI), coordinated by the State Department’s Bureau of Political-Military Affairs, have played a pivotal role in meeting the expanding need for well-trained, adequately equipped peacekeepers capable of responding to evolving mission requirements.

GPOI works to strengthen international capacity and capabilities to implement United Nations and regional peace operations. GPOI’s 53 partner nations make up the bulk of uniformed forces engaged in UN peacekeeping operations around the world. The program delivers training and equipment to build the capacity of our partners and enhances their capabilities to meet the growing global demand for specially trained personnel required for peace operations.

Under GPOI, the State Department works with the Department of Defense to support training programs for future peacekeepers, such as the recent Shanti Prayas III multinational exercise in Nepal. GPOI supports not only military peacekeeping activities, but also contributes to the development of formed police units (FPUs), complementing the efforts of our colleagues in the State Department’s Bureau of International Narcotics and Law Enforcement Affairs.

Under GPOI, we are also working to expand the number of women serving in international peacekeeping missions, as well as increase awareness among all peacekeepers of the importance of addressing gender-based violence that is all-too-common in many post conflict countries. We are further strengthening efforts to prevent sexual exploitation and abuse by peacekeepers, which in addition to harming local populations, undermines the very purpose and credibility of a peace operation.

United Nations peacekeepers play an indispensable role in advancing the cause of peace and security in a world ever more burdened by violence and instability. This is a difficult task, and the United States is committed to working with like-minded countries to continue to push for both greater effectiveness and fiscal efficiency in this important mission. As a leading source of financial, technical, and material support for building peacekeeping capacity, the United States demonstrates its ongoing commitment to effective UN peace operations.

About the Author: Major General Michael D. Rothstein, United States Air Force, serves as the Deputy Assistant Secretary for Plans, Programs, and Operations in the Bureau of Political-Military Affairs.