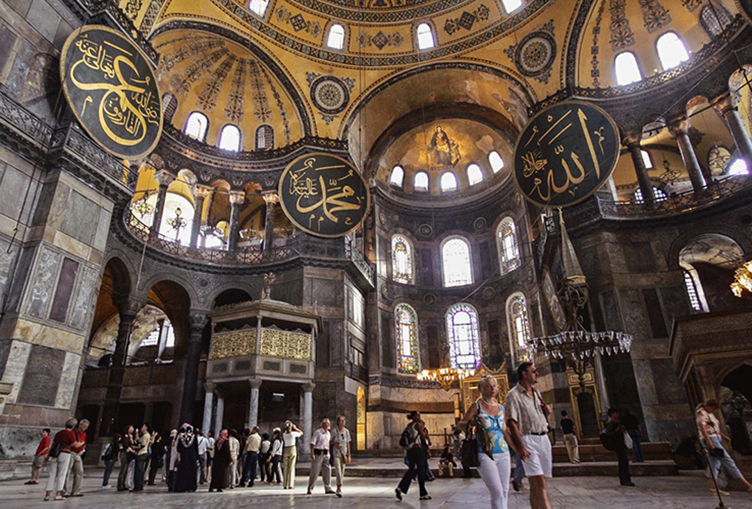 he Hagia Sophia in Istanbul is among the historic treasures that students at Binghamton University study as part of an Ottoman and Turkish program. (© AP Images)

Jacklyn Yoon is a sophomore at Binghamton University who wants to be a medical missionary. She also is learning the Turkish language. “[I hope] that maybe I can be able to use my Turkish skills to converse with some of my patients,” she says.

She is one of many students at Binghamton, in upstate New York, taking advantage of the school’s expanding Ottoman and Turkish studies program, which, thanks to a multiyear grant from the State University of New York and the Turkish government, has expanded to include language and cultural courses.

“It is more important than ever to understand the modern culture that exists there,” says Yoon, who grew up in Los Angeles.

The university has been known for its Ottoman and Turkish studies since the 1980s. “The graduate program really has this international reputation, and now what we’re doing is opening it up to the undergraduates much more,” says Kent Schull, associate professor of Ottoman history and co-director of the Middle East and North Africa program.

Binghamton also has offered a dual-degree program since 2000 that allows Turkish students to spend two years at a Turkish university and two years at Binghamton and graduate with degrees from both universities. The program is sponsored by the State University of New York and the Turkish Council of Higher Education.

Up to 400 Turkish students attend Binghamton, and they “bring a lot to our campus,” says Schull. The opportunity for American students to interact and learn from their Turkish colleagues “makes them better citizens.”

Turkish culture classes are particularly popular. Key says that in his classes, he makes sure groups have a mix of students from the U.S., Turkey and elsewhere. The diversity of backgrounds benefits everybody, he says. “I’ve seen them form pretty good friendships and working relationships.”

Yoon agrees and says that her friendship with Turkish students has definitely inspired her to learn more about the culture as well as to visit Turkey.

Turkish studies are “more critical than ever,” says Schull. “Turkey doesn’t exist in a vacuum. It is a vital member of a very important geopolitical space and alliances around the world.”