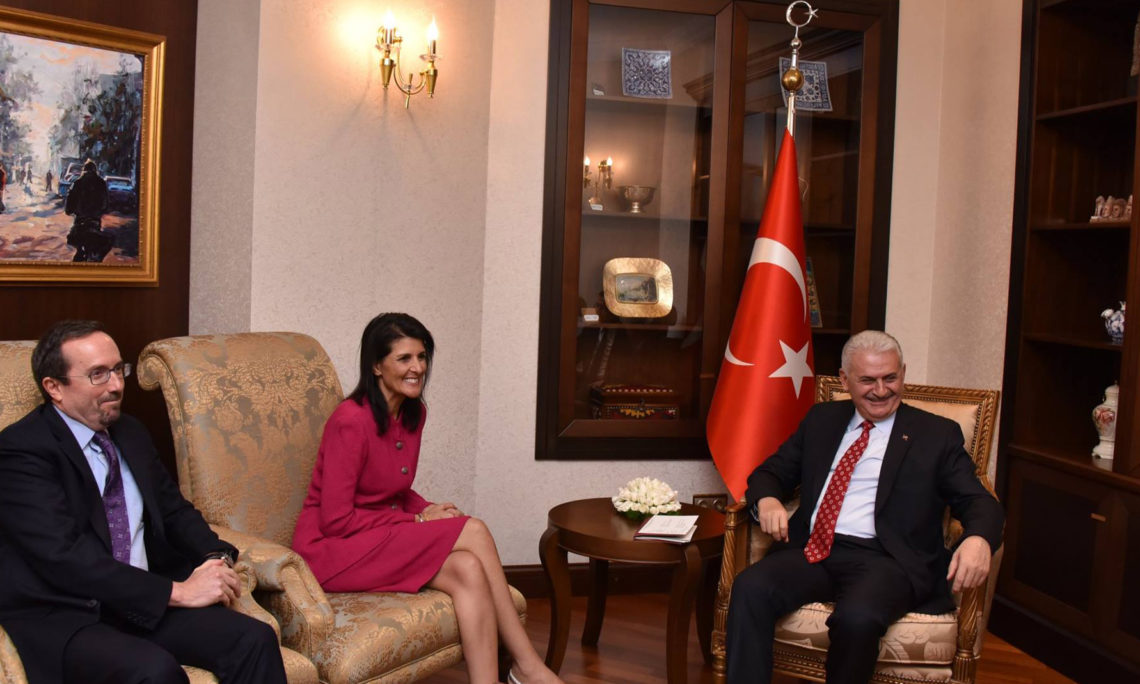 During her visit to Turkey, U.S. Ambassador to the United Nations Nikki Haley met with Prime Minister Binali Yıldırım to discuss the present conditions of Syrian refugees. Ambassador Haley stated that she thanked Prime Minister Yıldırım for Turkey’s support of 3 million Syrians and discussed continued U.S. support for Turkey’s efforts as the two countries work together towards a solution in Syria.

As part of her visit to Turkey and Jordan, Haley met with heads of United Nations agencies in Turkey and representatives from NGOs working on refugee-related issues at a breakfast meeting held in the U.S. Ambassador to Turkey John Bass’ residence. Ambassador Haley toured the ‘Art from Exile’ exhibition, which is comprised of works by Syrian artists, in Ambassador John Bass’ residence with great interest. For more information on this exhibition and to see these works: https://tr.usembassy.gov/art-from-exile

Ambassador Haley was accompanied by officers from the World Health Organization and the U.S. Embassy, as well as the U.S. Ambassador to Turkey John Bass during her visit to the Migrant Services Center, funded by the United States and supported by the World Health Organization, the Turkish Ministry of Health and Ankara’s Keçiören Municipality, which aims to facilitate access to public services for migrants living in the area. The Center in Keçiören provides assistance services to refugees, including such assistance units as: Legal Assistance, Medical Consultation, Educational Consultation, Business and Vocational Consultation, Social Cooperation and Solidarity and Communications Desk.

In order to be able to observe U.S. support to the refugees hosted by Turkey on-site, Ambassador Haley went to a United Nations trans-shipment hub, as well as the Turkish-Syrian border gate at Reyhanli. Haley also visited the Boynuyoğun refugee camp in Altınözü, where she took a tour of the social facilities used by the refugees staying there.