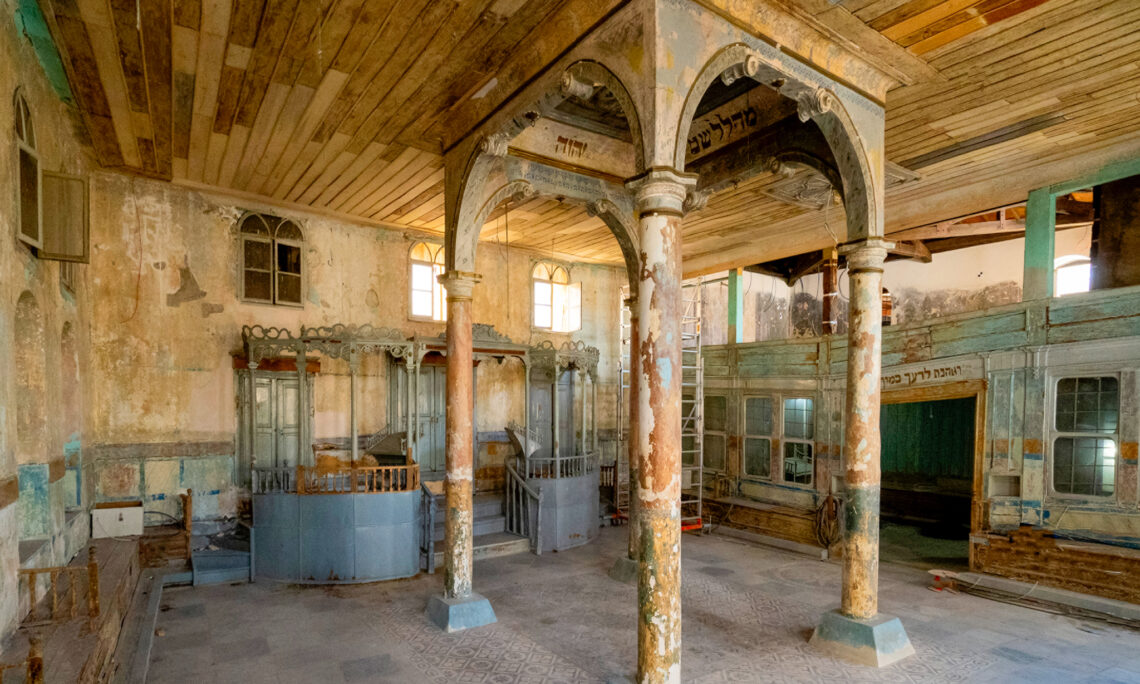 The main hall of the Etz Hayim synagogue — a double altar, an ark and four pillars with a dome that surrounds the altar's original location — undergoes conservation work. (© Yusuf Tuvi)
By Lauren Monsen

With initial help from the U.S., historic preservation experts in Turkey are completing the conservation of a historic synagogue in the region of Izmir. The Etz Hayim synagogue, which not long ago was on the verge of collapse, soon will welcome scholars and tourists.

Some of the most meaningful contributions in religious Jewish history took place in Izmir. “The survival of this particular synagogue and the establishment of the heritage site is a source of pride” for Turkey’s Jewish community, project manager Nesim Bencoya said. “It strengthens the status of the Jewish community as the creator of a new cultural and touristic destination in the city.”

There has been a Jewish presence in Izmir since the 5th century B.C.E. The largest influx of Jews into the Ottoman Empire occurred in the late 15th century, when Jews who had been expelled from Spain and Portugal resettled in Izmir. Coexisting peacefully with their Muslim neighbors, the Jews of Izmir built more than 30 synagogues, including many with Spanish-Judeo architectural features.

Only 13 of those 30 original synagogues remain, and they are in various stages of disrepair. The restoration of the Etz Hayim synagogue was made possible when the U.S. Department of State provided a $73,000 grant through the Ambassadors Fund for Cultural Preservation to stabilize the building. (Through the Ambassadors Fund, the State Department has supported 1,000 projects in 133 countries since 2001.)

Etz Hayim, believed to be the oldest synagogue in Izmir, likely dates back to the 14th or 15th century. It was rebuilt in the mid-19th century. Its restoration is part of a larger undertaking known as the Izmir Jewish Heritage Project, which aims to restore additional synagogues, while establishing a Living Museum of Jewish Heritage and a cultural center.

But the first, most urgent task was to shore up the Etz Hayim synagogue. All Judaica was removed for safekeeping so that the support could be added for the building’s floor. Municipality approval was given for carpentry work and repair of the Torah ark and bima (a raised platform with a desk, for reading the Torah and Haftarah on the Sabbath and during festivals). Next, the walls were coated with protective paint to prevent rotting, and the synagogue was cleaned.

The project, which spanned several years, was carried out with with an eye to preserving the building’s architectural integrity. Bencoya and his assistants conducted research, analyzed materials and prepared conservation plans based on data and experience accumulated during the floor stabilization.

In about three months, the synagogue will be open to visitors.

In addition to supporting the Izmir region, the United States and Turkey on January 19 signed an agreement to protect movable cultural property from illegal importation into the United States.

Cultural property trafficking has been driven by a lucrative international market for antiquities and carried out by transnational organized criminal and terrorist groups. Thefts have been “devastating,” said U.S. Ambassador David Satterfield at the signing, especially in Turkey, the “nexus of multiple civilizations, each of which has left its mark on the country and our world history.”

“Today’s agreement demonstrates the joint commitment of the United States and Turkey to ensuring that Turkey’s heritage will be protected and accessible for future generations,” he said.