Home Anasayfa | News & Events | Who Are the 2018 Trafficking in Persons (TIP) Report Heroes? 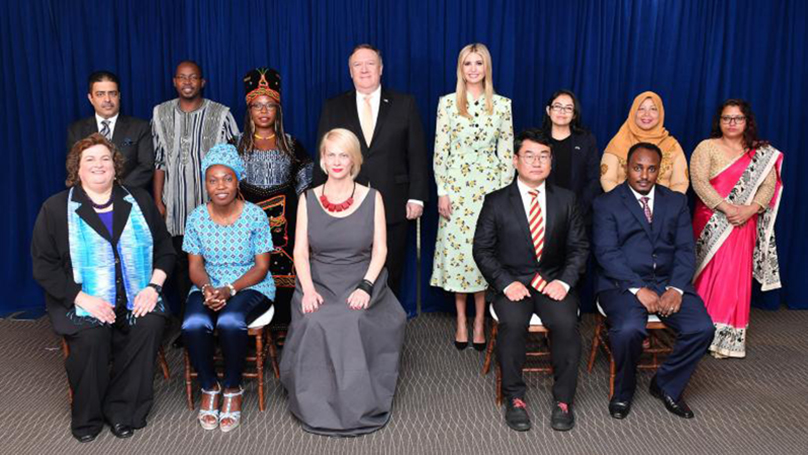 Each year, the Department of State honors individuals from around the world who have devoted their lives to the fight against human trafficking. These individuals have included NGO workers, community activists, lawmakers, police officers, survivors of human trafficking, and concerned citizens. They are recognized for their tireless efforts–despite resistance, opposition, and threats to their lives–to protect victims, punish traffickers, and raise awareness about human trafficking trends in their countries and abroad.

As the CEO of Bahrain’s Labor Market Regulatory Authority and Chairman of the National Committee to Combat Trafficking in Persons, Ausamah AlAbsi has played an instrumental role in increasing protections for trafficking victims and reducing the vulnerability of migrant workers to human trafficking in Bahrain.

As the director of the department in charge of combating violence against children within the Ministry of Women, National Solidarity and Family, Josue Ango is a driving force behind Burkina Faso’s efforts to combat human trafficking, including cross-border trafficking involving Cote d’Ivoire, and has worked tirelessly to reduce the vulnerability of Burkina Faso’s urban youth.

The head of the national Specialized Trafficking in Persons Unit in San Salvador, Yanira Violeta Olivares Pineda leads a team of prosecutors dedicated to holding human traffickers accountable and delivering justice to victims, and she has personally opened more than 143 cases involving 174 victims, securing more than 30 convictions.

A leading voice for migrant worker rights in Indonesia, Maizidah Salas uses her experience as a former migrant worker and survivor of human trafficking to lead an NGO she established, the Village of Migrant Workers, to provide skills training and support to individuals and their families who migrate for economic opportunity and increase awareness about human trafficking among this vulnerable population.

Sunita Danuwar, the co-founder and Executive Director of the anti-trafficking NGO Shakti Samuha and a trafficking survivor herself, has demonstrated an unwavering commitment to providing an array of services to survivors and at-risk communities across Nepal, elevating survivors’ perspectives, and raising awareness about human trafficking in poor and rural Nepali communities.

An inspirational voice in the fight against modern slavery, Blessing Okoedion plays an integral role in pushing Italian authorities to ensure that survivors, especially Nigerian women and girls, receive the services they deserve during their healing process and that law enforcement and service providers engage with survivors in an increasingly culturally informed, victim-centered manner.

As the Head of Policy and Learning at ASTRA, one of Serbia’s leading anti-trafficking NGOs, Ivana Radović has worked tirelessly to strengthen Serbia’s response to human trafficking through advocacy and engagement with the government, the development of reports and resources for practitioners, and the provision of legal representation for victims.

As a researcher and the founder and former Director of the Advocates for Public Interest Law, Kim Jong-chul has worked tirelessly to ensure justice for victims of human trafficking and to increase understanding of the issue of forced labor in South Korea and around the world, including seafood in East Asia, cotton in Uzbekistan, steel mills in India, electronics in Mexico, palm oil in Indonesia, and garments in Bangladesh.

Yosief Abrham Mehari is a practicing medical doctor who has demonstrated an unparalleled commitment to serving survivors of human trafficking in Sudan, devoting his personal time and resources to ensure victims in Khartoum and remote areas of the country receive high-quality medical care and support and volunteering at Eritrean and Ethiopian safe houses, where the majority of the beneficiaries are victims of trafficking.

About the Author: Kari Johnstone serves as Acting Director of the Office to Monitor and Combat Trafficking in Persons at the U.S. Department of State.